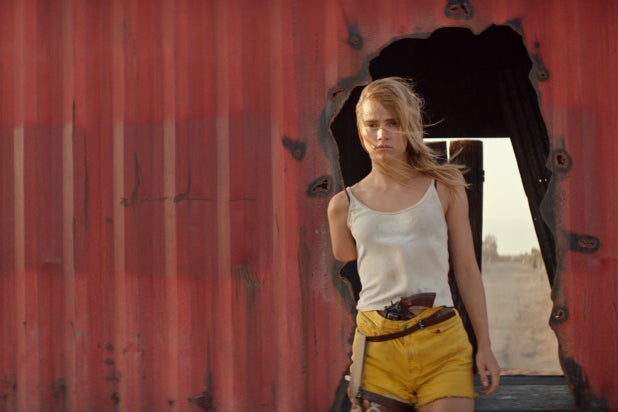 Arlen, the central character in Ana Lily Amirpour’s second feature, “The Bad Batch,” may be a girl, but she’s no Girl. Whereas the protagonist in the writer-director’s widely praised debut, “A Girl Walks Home Alone at Night,” is shrewd, Arlen is vapid. The Girl is a vigilante; Arlen fights predominantly when she needs to get out of a tight spot.

But probably the most important difference is that the Girl is unmistakably feminist. Arlen? She’s a naive brat whose only act of thoughtfulness or responsibility is minding a lost little girl.

And, of course, Arlen’s done something bad. At the beginning of Amirpour’s sophomore slump, Arlen (played by model Suki Waterhouse) is tattooed with a number and exiled to an arid, between-borders no man’s land to live among the rest of the “bad batch.” We don’t know her sin — complete uselessness, perhaps? — but we soon see her punishment: Chased down by someone in the fastest golf cart known to man, Arlen is about to be tied and gagged. And then her captor will saw off one of her arms and one of her legs.

In this town, it’s eat or be eaten, literally. But Arlen escapes and fortuitously finds a skateboard (OK, she has one thing in with the Girl) to wheel her hacked body on. She sees two signs that read, “FIND COMFORT.”

Amirpour then cuts to five months later and pans a desert shanty town populated with Arlen’s peers: a man talking to himself (Giovanni Ribisi, utterly wasted), a woman on an outdoor stripper pole, another woman begging her captor, Miami Man (Jason Momoa), not to hurt her. But as “Karma Chameleon” plays, he twists her neck. Now his young daughter, Honey (Jayda Fink), can eat tonight, and after they dine, he’ll sketch her holding a rabbit. There’s tenderness within all that muscle and brute force. (And also a group of fellow cannibalistic bodybuilders to match Miami Man’s brawn.) These batchers — look closely for Jim Carrey — live on a plane-crash site, its wreckage still there.

Arlen now has a prosthetic leg and a gun, and Keanu Reeves shows up. Apparently a cult leader, Reeves’ character is called The Dream, and his BB devotees cheer his words and dance to his music and whoop to his pyro. He has a harem of pregnant women who wear t-shirts reading, “The dream is inside me.” (Um, TMI.)

His role in the featherweight narrative is as obtuse as anyone else’s. Why do we see this milieu through Arlen’s eyes? (Which often look lined, while her lips are a bit too for a member of this dystopian society.) What role do Miami Man and his daughter serve outside of humanizing two characters? What the hell does it all mean? Here’s one clue that doesn’t illuminate yet helps explain: Amirpour reportedly sent crew members copies of “El Topo,” Alejandro Jodorowsky’s trippy 1970 cult favorite.

“The Bad Batch” feels less like a coherent film and more like a pastiche. Amirpour nods to spaghetti westerns and Quentin Tarantino with both visuals (which admittedly are often stunning) and the soundtrack (one entry instantly recalls Ennio Morricone and the Sergio Leone westerns he scored, as well as QT and the western music to which he often turns). The director is to be commended for her dedication to authenticity: She used prosthetics and as little CGI as possible to portray Arlen as an amputee, and had 90 percent of the on-location locals of Slab City, Calif., play extras in the film.

Regardless of your reaction to either of Amirpour’s films, you have to admire the fervor with which she takes on what are traditionally boys’ territories: Vampires, amputations, cannibalism? She approaches all fearlessly and wholeheartedly; this much is evident on screen.

Like Kathryn Bigelow, Amirpour has similarly and successfully played with topics outside of those expected from her gender. In her last two films, Bigelow has taken on the war. Now we have Amirpour to take on the gore.