We live in a time of disposable music when kids aren’t taught the difference between what’s good and what’s bad, singer-songwriter and rock ‘n’ roll legend Robbie Robertson told TheWrap – but, he added, we also live in a time when some of the mistakes of the past can be corrected, when technology and the market will allow for musicians to go back and get it right.

Robertson, the guitarist and principal songwriter in the iconic group the Band, is trying to take advantage of that second factor with the Band’s new box set “Live at the Academy of Music 1971.” And he’s trying to correct the former with a book aimed at teaching kids what they need to know about Little Richard, Billie Holiday and Johnny Cash, among others.

“Because of the times that we live in now, there’s a lot of disposable music,” said the writer of such classic songs as “The Weight,” “Up on Cripple Creek” and “The Night They Drove Old Dixie Down.” “Music isn’t necessarily made to last, and there’s always been disposable music.

“But there are always some people doing extraordinary work – work where you say, ‘Whoa, this could be around in a few years.'” 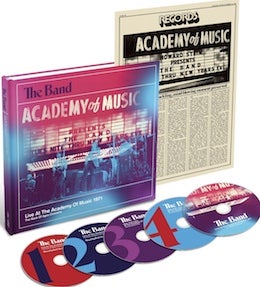 Robertson hopes that’s the case with the music on “Live at the Academy of Music,” which documents a four-night stand by the Band in New York City in December, 1971. At the time, highlights from that engagement were released on a double album called “Rock of Ages,” which was immediately acclaimed as one of the finest live albums in rock ‘n’ roll.

“It was really well received, and I completely appreciated that,” Robertson said. “But I had a secret that I kept to myself.”

The secret: He didn’t like the album, which he originally mixed in Miami with recording engineer Phil Ramone, then remixed in Woodstock when he, Ramone and the Band all agreed that the original version wasn’t good.

“I did the best I could under the circumstances, and I tried to tell myself that it was good,” he said. “But I knew deep down that I didn’t nail it.”

When Universal Music executives came to him several months ago, said they’d located the original master tapes and wanted to turn the recordings into a new box set, Robertson said he embraced the opportunity to accurately document the shows that he felt showed the Band playing at a peak it never again reached.

Pianist and singer Richard Manuel, he said, was “chilling” in his vocals on songs like “I Shall Be Released.” Bassist/singer Rick Danko sang powerful vocals, both lead and background, while playing fretless bass, an instrument that requires the player to listen closely to every note – “he was doing something that from my point of view is impossible,” said Robertson. Keyboardist Garth Hudson would “play things that no other keyboard player in the world every played before, and to this day there is nobody who has ever caught up with him.” And drummer/vocalist Levon Helm was, “of all of us, the person who just came out and nailed it every time.” 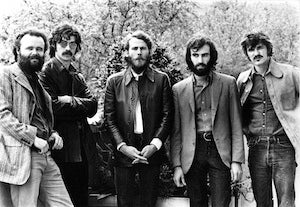 Helm, Danko and Manuel have all died, and relations between them and Robertson were occasionally strained in the years after the group stopped touring with the 1976 concert known as “The Last Waltz,” which was filmed by Martin Scorsese.  But Robertson said he’s thrilled to go back and get it right after 40 years. “This is the complete fulfillment of what that was,” he said of the set, which includes two discs mixed by Robertson and Bob Clearmountain to “make it sound as beautiful as we could,” and another two discs mixed by Robertson’s son Sebastian to be a rougher, bootleg-style document of the complete New Year’s Eve show, which included four songs with special guest and longtime Band collaborator Bob Dylan. A fifth disc is a DVD, though largely with still photos and a 5.1 surround-sound  audio mix.

Sebastian Robertson is also a partner on Robertson’s new book, “Legends, Icons & Rebels: Music That Changed the World,” which was also co-written by Jim Guerinot and Jared Levine. A collection of short essays and illustrations about 27 seminal musicians, including Louis Jordan, Aretha Franklin, Elvis Presley, Billie Holiday, Joni Mitchell, Ray Charles, Hank Williams, James Brown, the Beatles and Dylan, it is aimed at young readers and comes with a CD of music from the featured artists.

It was inspired by his son’s work at a children’s learning center – where, Sebastian reported, kids responded more enthusiastically to Marvin Gaye or Johnny Cash than to typical children’s music.

“He said we should do a thing aimed at kids, when they get to an age where they can absorb these kind of things, that sets them straight for the rest of their lives and gives them a taste factor,” said Robertson. “I love the idea of having a kid who says, ‘Yeah, of course I knew about Billie Holiday and Johnny Cash when I was nine years old.’

“Kids today are not tapped on the shoulder and told the difference between what’s really good and what’s not,” he said. “We need to have a taste factor in our life. It isn’t about what’s popular, it’s about what’s really good. And when you know about all the artists that are in this book, and have tasted that, you’re never the same – because you know what the real great stuff is, and that how everything grew out of that.”

“From that point on in life, you have a taste factor that shows you, ‘Oh, what this guy Jake Bugg is doing, that’s an offshoot of Bob Dylan.’ You can tell this guy has learned from a master, and because of that it’s kind of cool.”

Robertson said he’s currently working on music for Martin Scorsese‘s “The Wolf of Wall Street,” and he’s about halfway through writing his autobiography. In addition to a rock ‘n’ roll career that began in roadhouses when he was a teenager and included several years with Bob Dylan during Dylan’s crazed ’60s peak, Robertson was a legendary carouser during the years he hung out with Scorsese in the ’70s and ’80s.

About his autobiography, he simply teased, “Boy, do I got some stories to tell.”

Check out this webisode, given exclusively to TheWrap: