If you saw “The Batman” and want to learn more about The Riddler character, you’re in luck. DC Comics revealed Friday that a prequel comic titled “Riddler: Year One” is coming this October, and it was written by Paul Dano himself. Dano, of course, plays the bespectacled serial killer who goes by The Riddler in the blockbuster reboot.

No further details were disclosed, but a first look at the comic was revealed and it appears to tell the story of how The Riddler formulated his grand plan that eventually saw him murdering well-known members of the Gotham community. And drawing the ire of Robert Pattinson’s Batman, who makes it his mission to take The Riddler down.

“The Batman” opened exclusively in theaters on March 4, and immediately fans and critics alike embraced co-writer and director Matt Reeves’ new take on the Caped Crusader. The film picks up in Year Two of Bruce Wayne’s so-called “The Batman Project” and finds him singled out by a series of clues The Riddler leaves behind at murder scenes. 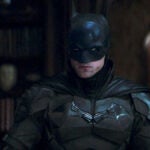 Also Read:
What to Watch After ‘The Batman’

The story unfolds in procedural, meticulous fashion and builds to a surprising showdown between The Riddler and Batman during which the former firmly believes he’s been fostering a friendly collaborative relationship.

There’s a connection between The Riddler and The Batman revealed in the movie that deepens the emotional resonance of the film for Pattinson’s Bruce Wayne, and it’ll be fascinating to see how or if this new Riddler comic expands on that idea.

Dano is an accomplished actor but also a writer himself, having co-written the screenplay for his 2018 directorial debut “Wildlife” with his partner Zoe Kazan. “Riddler: Year One” is his first comic book. He’ll next be seen as the star of Steven Spielberg’s semi-autobiographical film “The Fabelmans,” in theaters this November.

Check out a sneak preview of the comic below.