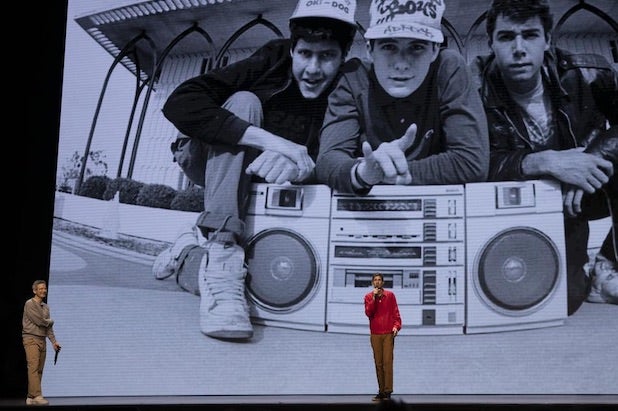 “The Beastie Boys Story,” the rock ‘n’ roll documentary that was to have premiered in March at the South by Southwest Film Festival and is now premiering April 24 on Apple TV+, is in many ways the most conventional movie that director Spike Jonze has ever made. In a career marked by bold works like “Being John Malkovich,” “Adaptation” and “Her,” along with numerous groundbreaking videos, it’s a music doc that is, in effect, a straightforward chronicle of a live performance — a concert movie of sorts, except that the band is talking, not playing.

But maybe that very concept is what’s bold about “The Beastie Boys Story.” Music docs are usually built around revelations and unguarded moments where the subjects reveal more than they intended (or at least more than they want us to think they intended). In this case, though, everything that surviving Beastie Boys members Michael Diamond and Adam Horowitz say is based on a book that they published in 2018, and it’s planned, rehearsed and on the teleprompter screens in the Brooklyn theater where the show was filmed.

Considering the raw, frenetic energy of many of the videos that Jonze made with the band (“Sabotage” being a prime example), the last thing you might expect him to do is to bring in a few cameras and shoot this lecture-with-clips as if it’s a hip-hop TED Talk.

But that’s what “The Beastie Boys Story” is: the filmed record of three nights in which Diamond and Horowitz showed film clips and photos while recounting the history of the band in front of audiences of fans at the Kings Theatre in Brooklyn. Despite the relatively staid format, it still manages to be a lively and occasionally touching journey through success and failure, artistry and excess, industrial-strength brattiness and even a bit of hard-earned wisdom.

With its abundance of vertiginous shots looking up from the pit in front of the stage, the film would no doubt seem bolder and punchier if it could be viewed in IMAX, the way it was scheduled to premiere at SXSW. That’s also how it was going to be distributed by Oscilloscope Laboratories, the adventurous film company that was co-founded by the third Beastie Boy, Adam Yauch, four years before his death to cancer in 2012. But the festival was canceled and theaters were closed by the coronavirus, so its premiere comes instead on Apple TV+ on Friday.

Like most rock docs, “The Beastie Boys Story” is mostly a film for fans, which is why it makes sense to film these stories in front of an audience of devotees rather than just in front of a documentarian’s camera. Diamond and Horowitz, now comfortably in their 50s, play to the crowd even as they manage to bring perspective to a career launched on the idea of being, as Diamond says, “a cartoon rap version of an ’80s metal band.”

In fact, Diamond, Horowitz and Yauch — who became known as Mike D, Ad-Rock and MCA, respectively — were teenage fans of punk music when they began playing together in the early ’80s. Through happenstance, luck, a whole lot of attitude and a crazy spark of what would later prove to be talent, they met fledgling producer Rick Rubin and rap mogul Russell Simmons, and were signed to the seminal rap label Def Jam and booked to open for Madonna on her first major U.S. tour.

Their dilemma as they headed on the road with Madonna, Diamond says, was simple: “What could we do that would make all these people remember us? It certainly wasn’t going to be our microphone mastery at the time. Our big idea is that we should be as rude and as awful as possible on stage … We’d be memorable. Memorable f—ing jerks.”

(Having been at one of those Madonna shows, I can testify that they succeeded in those goals.)

In the aftermath of that blast of notoriety, the Beasties completed their debut album, “Licensed to Ill,” which contained “Hold It, Now Hit It,” “Brass Monkey,” “Girls” and the huge hit “Fight for Your Right (to Party),” which helped make it the first rap album to top the Billboard charts.

It was problematic that rap music, a genre invented and pioneered by black artists, enjoyed its biggest success with an album by three white kids, but the film doesn’t get into the clear racial bias that the hugely influential MTV was showing in those early years. But it does explore another by-product of that success: a big image problem for the Beasties.

“It turns out that they loved ‘Fight for Your Right (to Party),'” Diamond says. “And you know what? We liked being loved … But something weird was happening during all of this. We morphed from making fun of party bros to actually becoming those dudes.”

The identity crisis hit them hard, to the point where they hated their own songs by the time they got off the road after “License to Ill.” (And they really hated that 20-foot inflatable penis that they thought would be fun to insist on having onstage before the tour started.) In the days after that album, they had a falling out with Rubin and Def Jam, moved to Los Angeles, signed a new record deal with Capitol and made the adventurous, groundbreaking, dense (and very expensive) masterwork “Paul’s Boutique” — which, to their dismay, didn’t sell at all, leaving them as a faded novelty act in the eyes of the record business.

From there, it was a matter of building on the artistic credibility they’d secured with “Paul’s Boutique,” while rebuilding commercial credibility as well. “It’s not so much that we grew up,” Horowitz says at one point. “We wised up.”

That they did, and “The Beastie Boys Story” is full of affecting moments in which Diamond and Horowitz look back with both bemusement and real regret at aspects of their past, including the friends they lost and the way they treated women: firing Kate Schellenbach, their original drummer, because Def Jam didn’t think she fit their “tough rapper guy identity,” or writing songs like “Girls,” with its brutal sexism meant to be taken as a joke.

In a way, there’s a stark dichotomy between the brash enfant terribles we see in clips behind Diamond and Horowitz and the thoughtful, even enlightened middle-aged men who are telling the story. But it helps emphasize the artistry that was sometimes obscured by the gleefully obnoxious excess — and besides, these guys still clearly get a kick out of the aspects of their story that aren’t completely embarrassing.

And with Yauch present only on video, that story can’t help but be tinged with sadness and loss. “When Adam died, we stopped being a band,” Diamond says at the beginning of the film — and when it gets to the end, Horowitz struggles to talk about the last show the band ever did, continually stopping to compose himself.

It’s an emotional, moving moment for Horowitz and Diamond, and for the audience. And if a movie about this band of self-described “f—ing jerks” can make you feel emotional, maybe that’s proof enough that Spike Jonze didn’t need to get adventurous with this one — the material did it for him.