(Warning: This post contains spoilers for Wednesday’s episode of “The Blacklist.”)

“The Blacklist” returned with a new episode this week, an hour that revealed almost the entire backstory of Raymond “Red” Reddington (James Spader) and Elizabeth Keene’s (Megan Boone) relationship. We say almost, because the installment, titled “Nachalo,” ends before Liz can get the answer to exactly who Red is — though it’s pretty much guaranteed that reveal will come on next week’s Season 8 finale.

The big truths we do have by the end of the hour are that Liz’s mother, Katarina Rostova, is still alive — because the now-dead woman Liz thought was Katarina Rostova (played by Laila Robins) is not Katarina Rostova. And we’re left with some big clues as to who Red really is, though not an outright answer.

During Wednesday’s “The Blacklist,” Red, who revealed to Liz in the previous episode that he is in fact N-13, the elusive spy she’s been hunting this entire season, brings Liz inside the “epicenter” of his operation in Latvia and begins to tell her the story, the true story, of her life and how he came into it.

Through black-and-white scenes featuring multiple “Blacklist” characters we know and love telling us the story, Liz is given a detailed explanation of how her then-married mother, Katarina Rostova (Lotte Verbeek), became a spy and struck up a relationship with her father, the real Raymond Reddington, to gather intelligence on the U.S. operative at the request of Dom, Katarina’s father, and the KGB. 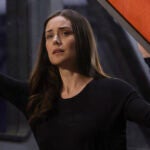 She became pregnant with Liz (real name Masha Rostova) and let her husband, Constantine Rostov, believe the child was his, while continuing on with her relationship with Raymond, who was also married and had another child. Eventually, Raymond realized Katarina was spying on him while he was also spying on her. Things took a dark turn on the night of the infamous, yet mysterious fire, during which a very young Liz shot and killed her father, who was in a fight with Katarina, as she had come to take Liz.

It’s revealed that the woman we believed to be the present-day, now-deceased Katarina Rostova (played by Laila Robins), is actually a woman named Tatiana Petrova, the person who was tasked by Ilya Koslov and Dom with taking over her identity so the real Katarina could go into hiding to keep herself and Liz safe, sending the little girl off to live with Sam, who becomes her adoptive father.

But the real Katarina knew that Sam wouldn’t be able to protect Liz forever on his own, so she “created” and “constructed” a new Raymond Reddington, because the U.S. government — and the rest of the world — never found out he had died, and this version of Red was one Katarina could control would be able to watch over Liz. 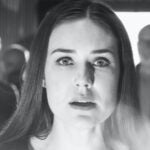 “What does that mean, constructed?” Liz asks the storyteller version of her mother, who says, “It meant a complete transformation,” as a scene of a surgery is shown, while James Brown’s “It’s a Man’s World” plays.

Then this new version of Red is seen picking up 13 packets of classified KGB intelligence from Ivan Stepanov, part of the plan that would allow him to pose as the real Raymond Reddington, a man who was known for having extensive secret intelligence, and expand his intelligence network — a.k.a. the Blacklist — as a way to secure Liz’s safety.

Meanwhile, Tatiana was trying to figure out where the real Katarina was in order to get her own life back, and she tried to get close to Liz and told her she was her mother Katarina, in a long con to get the location of the real Katarina out of Red. This instead got Tatiana dead at Red’s hand.

Liz says to the imaginary black-and-white version of her mother telling the story, “Now we have the why, now I want the who. Who is he? Who became Reddington? And where have you gone? You are my mother, but you let someone else watch over me, let me believe you were dead, but you are living. Where are you?” 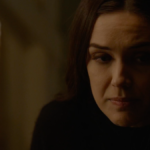 Also Read:
‘The Blacklist': Fugitive Liz Has an Awkward Chat With the Task Force About Red’s True Identity (Exclusive Video)

As Liz is demanding these answers, the black-and-white story is receding as shouts and shots ring out in the real location they have been this whole time, Red’s “epicenter,” which is being stormed by Neville Townsend. Liz loses her mother’s face in her mind as she hears Red’s voice shouting at her while she keeps demanding to know who he really is. The scene is done in such a way that it strongly implies Katarina is the one who became Raymond Reddington.

Then, Liz gets shot.

Red and Dembe take Liz down into a bunker and block the hatch to protect them all from Townsend, who says Liz tipped him off to their location in order to gain her freedom by allowing him to kill Red as revenge for what Red did to Townsend’s family. The episode ends with Red pressing a button that puts the entire epicenter of his intelligence up in flames, both killing Townsend and destroying his decades of collected intelligence.

But we still don’t have confirmation of who Red is, even though Katarina becoming Red is a definite possibility at this point, so it’s likely that piece of the puzzle will be revealed on next week’s Season 8 finale.

As TheWrap previously reported, that episode is expected to feature the conclusion of Liz’s storyline and will be the last to feature Boone, who is exiting “The Blacklist,” as a series regular. The show has already been renewed for Season 9.

The Season 8 finale of “The Blacklist” airs next Wednesday at 10/9c on NBC.