Ready to fill up on Cuphead?

“The Cuphead Show!” (exclamation point theirs) is an animated adaptation of the 2017 video game “Cuphead,” which starred Cuphead and Mugman as they battled their way through increasingly difficult levels and faced off against, amongst other things, the devil himself. Netflix, the streaming service that brought “The Witcher” and “Arcane” to life, has gone to great pains to bring the original game’s old timey animation style to life while maintaining its irreverent humor and oddball tonal shifts (there’s a major emphasis on spookiness).

Dave Wasson, who worked on Disney’s most recent “Mickey Mouse” shorts, developed the property and executive produces the show, and he was able to answer all of our questions about maintaining the feel of a 1930s cartoon in 2022, those three-dimensional backgrounds, and what is next for Cuphead, Mugman, and the rest of the gang. 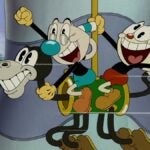 What was the progression of what you guys were trying to do with the “Mickey Mouse” shorts, and then what you’re doing here with “Cuphead?”

That’s a great question. I think our sort of prime directive on the “Mickey” shorts was to take these characters that everybody knew and freshen them up. And actually we were really encouraged to make funny shorts on top of that. Which was really a treat and they meant it. Sometimes people say that and then they don’t really mean it, but these guys really did want us to make them funny and let us make them funny. And I have to say before “Cuphead,” that was probably one of the funnest gigs I ever had.

I spent, I think it was five years doing that. Yeah. And even though I think that stylistically we touched on the thirties, obviously those character designs were invented back then, but there was sort of a splash of 1950s flare in those things as well.

A hodgepodge neat styles lived in those things. In “Cuphead,” I think we really did a deeper dive into 1930s cartoons. The Moldenhauers who created the game really did an amazing job of making that game feel so authentically 1930s. And that it was a real love letter to like the style of that time, that rubber hose animation. And I think coming onto this show, I really wanted to embrace that and really build off what they already had in that game, but create real solid believable characters that were also funny. 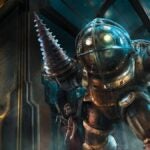 Also Read:
‘Bioshock’ Movie Adaptation in the Works at Netflix

Did you know about this game before you signed on?

Oh, I absolutely did. I think even though I’m not a gamer at all, when Cuphead was finished it made a huge splash within the animation community. Cause the animation, it is so good and the backgrounds are really great and just those amazing cycles that they did. It really looks like if they had video games in the 1930s, that’s what one would’ve looked like. So yeah, not really knowing anything about gaming. I was super aware of Cuphead when it came out. And was a big fan of the animation. I probably checked out the whole thing on YouTube before without ever having to play the game, because it’s way too hard for me. When I heard that there was interest in making a show. I was like, man, I got to figure out how to get involved in this thing.

Aesthetically, this show is aggressive, in terms of the film grain and look and feel of it. Was there ever a moment where they asked you to pull back at all?

No. You mean, they being Netflix or our bosses?

I don’t think so, because I think people love the game. If we were doing a show that wasn’t based on anything often you’re trying to convince executives like, look, this can work. I promise you this can work. But we stylistically, we had proof that this thing looks great and is awesome and people love it.

I think it spared us from having to make a case for a lot of that stuff. In terms of its visual look, we still had to come up with the great characters. And that was the great joy of this job was to create the characters for this game. Because we had visually, we knew what they looked like and we knew what the world looked like, but they didn’t really have personalities. There was no real connection between why is the world like this? What would it be like to walk from Cuphead’s house over to where Porkrind’s shop is set up? What does that actually feel like? So that was the stuff that we had all these, all this sort of visual, beautiful visual smorgasbord to kind of pick and choose from and play with.

The look of this show is amazing because it’s computer animation but there are these touches which make it very 2D, like shadows that make it look like cels.

Well, we knew pretty much the idea was we wanted to make this thing look like something that could have been produced in the 1930s. That was always the goal. And like you were saying, we came up with a process where we could put a drop shadow under the cell because often when they were shooting those cells on backgrounds, there’d be a tiny little space. And then when it was lit with a real light, it would cast a little shadow on the background.

We added layers of film grain and a little bit of dirt. We wanted to make it look like if you found this thing, it hadn’t been dropped on the floor. It wasn’t filthy and covered with hair. It was something that was newly made in the 1930s. It was in pretty good condition from the 1930s, if that makes sense.

In a vault somewhere.

Yeah, exactly. Like you found it in a vault and it was in pretty pristine condition. We knew we wanted that from the beginning and then we worked with, it was actually a studio called Lighthouse. We knew in order to create as much volume of animation that we are going to need on the TV schedule that we would have to kind of embrace more modern tools.

The video game was all animated by hand and it just wouldn’t be physically possible to do that on a TV schedule. This is a process known as Harmony animation, and pretty much what’s done is they take drawings and sort of build a two dimensional looking rig where it’s pretty much a puppet. But what you can do and this is very laborious and time consuming, but you fed hundreds of unique, original drawings to the animation of Harmony. And then that makes it really look like traditional 2D animation. That was always super important to all of us. We’re still creating all of these drawings by hand. That’s the secret recipe. It’s not an easy secret recipe, but that is the secret recipe to making Harmony look like traditional 2D animation. 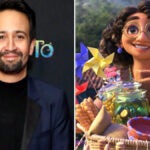 Can you talk a little about the stop motion-y backgrounds and where those came from?

Absolutely. So in the 1930s, the Max Fleischer Studio came up with this process that they called the stereoscopic process where they would build these elaborate stop motion sets on this giant rotating table. And then they would hang cells in front of that and they would slowly turn the table and take a picture one from at a time while they swapped out these cells. And then they you’d have a 2D Popeye, walking across a 3D background. And then the Fleischers went out of business after the 30s. The process died with them. That process was so signature to the 1930s cartoons that we just knew, as a group, we have to do that. That was part of my initial pitch – we’re going to have 3D backgrounds, we’re going to do this stop motion thing.

And we found a studio, probably the only group of people that still know how to do this. Screen Novelties. We were auditioning different stop motion studios and we talked to those guys for five minutes and they were like, “Oh my God, the Max Fleischer stereoscopic process, please let us do this. We’ve dreamed of this our whole life.” We were like, oh okay I think these are our guys and gals.

We did a modern version of that, where we would pick certain scenes and we tried to use it a little more strategically. The Fleischers used it anytime they had a panning background. It might just be Popeye taking Swee’Pea for a walk and not too much happening, but we would try to use it if there was an exciting moment, like a chase or kind of a heightened emotional moment. We would try to use that the process then, so it heightened the experience of what you were watching or sometimes we’d use it on establishing shots to really draw you in, because it’s such an inviting look and it seems like, what am I looking at? That was something that we were just like, that has to be done.

This batch of episodes ends on a cliffhanger. We know there are at least 40 coming. Do you want to tease what’s in store for Cuphead and Mugman?

Oh my gosh. I don’t even know if I’m allowed to do that. Actually there’s 36 because what we ended up doing is in some cases we would combine two episodes into a double length. We did that in a number of cases. You definitely have these longer form adventures that they’re going to go on. I will say that I think as we got better. I think these episodes are just going to look better and some of our best stuff is coming up after the first drop. And we also have an overarching story with the devil that pretty much carries all the way through the entire series.