“Normally when I’m in search of an angry mob of people screaming anti-science, deep state, vaccine microchip conspiracy jazz, I head to the Heartland of America,” Klepper says, introducing the segment. “But it turns out I could find those very same people in my very own backyard.”

The segment was filmed at an August 15 protest at Gracie Mansion, the home of Mayor Bill de Blasio. The protesters assembled to voice their outrage at the city’s recently imposed vaccine mandate. “It was a mix of hardcore anti-vaxxers, people who are okay with vaccines but hated the mandate and then, of course, some people who put together a Joker costume once, loved the attention, so now that’s pretty much all they do,” Klepper says in the video. 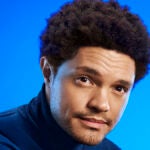 The segment is the latest in “The Daily Show” series “Jordan Klepper Fingers the Pulse,” which sees the correspondent visiting right-wing gatherings across the country. Recent installments include visits to the Jan. 6 insurrection at the U.S. Capitol, Donald Trump’s COVID rally and the Million MAGA March.

The full-length special “The Daily Show With Trevor Noah Presents: Jordan Klepper Fingers The Pulse – Into The MAGAverse” was recently nominated for an Emmy for Outstanding Writing For A Variety Special.