The Design of ‘Mank': How Costumes and Sets Energized David Fincher’s Homage to Old Hollywood

A version of this story about “Mank” appeared in the Race Begins issue of TheWrap’s awards magazine.

“Fincher-vision” is the term that costume designer Trish Summerville uses while discussing her experience working with director David Fincher. “His mind is so clear about what he wants, but there’s still room for spontaneity,” she said. “That’s why there’s so much happiness in the craft departments on his films. And so much repeat business.” Production designer Donald Graham Burt echoed her sentiment. “When David starts telling me about a new film, he visually sees the whole thing in his head,” he said. “But there’s room for expansion creatively.”

Those qualities were essential to “Mank,” Summerville’s third project with the director and Burt’s sixth. (Burt won an Oscar for 2008’s “The Curious Case of Benjamin Button”; Summerville’s other credits include “The Hunger Games: Catching Fire” and “Red Sparrow.”) Fincher’s look at the screenwriter of “Citizen Kane” is a rich evocation of 1930s Hollywood that’s grounded in the reality of its time and place, though the film was shot in silvery black-and-white.

The two department heads talked often, ironically, about color. “There are some colors that don’t translate well,” Summerville said. “Salmon and chartreuse and acid greens are jarring in black-and-white. So Don and I talked a lot about our color palettes.” Summerville also reminded Fincher, making his first black-and-white feature, not to place too much trust in his eyes and instead view everything through the camera monitor.

In designing costumes for the film, Summerville immersed herself in resources at the Academy Library and Western Costume, a warehouse founded in 1912. “I also watched films of the 1930s and into the 40s. And I went through Life magazine, Time magazine, lots of J.C. Penney catalogues. I always want to know what people had in their closets.”

That logic didn’t quite apply to the film’s title character (Gary Oldman as the hard-drinking Herman J. Mankiewicz). Summerville aged the fabric of his suits to give them a lived-in appearance. “Herman was wearing his suit all day into the night and the next morning, and he’s perspiring from the alcohol. We stuffed socks full of beans into the pockets, so it sagged. Gary put on about 12 to 15 pounds for the role, but we still made his collars too tight to give him a double chin. And we moved his pants below his belly, so he looks more sloppy.”

Glamour and excess are also themes in “Mank,” especially in two scenes set at the opulent estate of William Randolph Hearst (Charles Dance), the newspaper magnate who became an inspiration for the “Citizen Kane” character Charles Foster Kane — the first an extravagant birthday party for studio head Louis B. Mayer (Arliss Howard), followed later in the film by a circus costume ball thrown by Hearst’s mistress Marion Davies (Amanda Seyfried). Both scenes were set in different grandiose rooms at Hearst Castle, and were filmed about six weeks apart on the exact same soundstage.

Also Read: Oscars: 10 Films That Could Dominate in Below-the-Line Categories, From 'Tenet' to 'The Midnight Sky'

“Hearst Castle is a real collision of Gothic meets Classical meets Renaissance meets Spanish Revival,” Burt said. “The absurdity of it all, we started to realize, is that when you have enough clashing and intersecting of styles, it kind of makes sense.” Though “Mank” is not overt with visual references to Citizen Kane, one crucial moment from Welles’ classic reappears in Fincher’s film. “When Hearst is leading Mank out of his house,” Burt said, “we looked at the great hall of mirrors scene from Citizen Kane, not to rip it off but to capture some of the same feelings of despair.”

The circus-themed party at Hearst Castle was an event that actually took place, though when no research revealed what MGM’s Mayer came dressed as, Summerville suggested an appropriate outfit. “I asked David if we could make him a lion tamer, since that really tied into the lion logo of MGM. I loved the idea of the pith helmet, which he puts on when he leaves.” 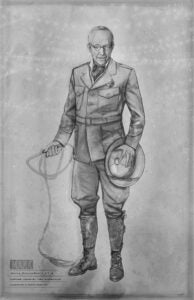 Hearst’s costume, meanwhile, did the mogul a favor. “At the actual circus costume ball, Hearst was wearing an insane clown-like bowtie,” Summerville said. “We got rid of that, because I didn’t want him to be comical at the table. I wanted him to be more sophisticated.” Of the veteran English actor Charles Dance (“Game of Thrones”), she explained, “He’s is actually very slim and fit, so we built him a belly and chest pieces. Hearst didn’t have really strong shoulders, whereas Charles does, so we needed to compensate by making his shoulders look a little slouchier and build his belly out.” 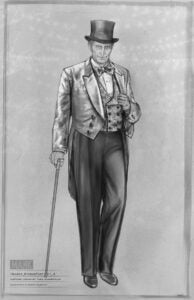 Of Hearst’s longtime mistress, the party’s hostess, Summerville said, “I put Amanda Seyfried in eggshell white, so she would really give some pop of light in the room. I found great images of Marion Davies from that party and we kept that pretty true to how she looked. In Marion’s book she said she loved the costume party so much she threw it again at her house. She said something like, ‘We expected 400 guests and only 200 arrived.'” 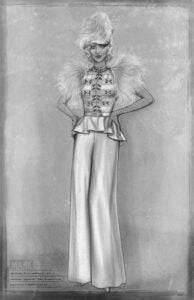 Though those scenes were done on a soundstage (Lady Gaga being the rare star who’s been given permission to film at the actual Hearst Castle), “Mank” also shot on locations around Los Angeles. “The ranch where Mank was sequestered to write, in Victorville, still exists,” Burt said. “We shot three or four days of exteriors there. And the big funeral pyre movie set, we built in the Thousand Oaks area.”

Burt also found an existing location to re-create MGM and Paramount offices and an old-school film editing bay. “It was a shell of a space with some windows,” Burt said, “and with some stylizing we built the writers’ rooms.” The site proved to be somewhat apt: “It was an old closed-down mental hospital in Pomona.”