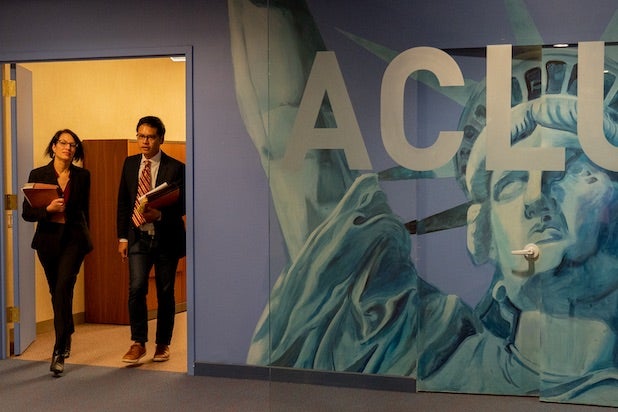 You could argue that the documentary “The Fight” takes on too much, because it juggles four different court cases on four different, vitally important subjects, jumping back and forth between the quartet of cases and trying to give them all their proper due in its hour-and-a-half running time.

Or you could argue that “The Fight” takes on too little, because those four cases are supposed to give us a sense of all of the work that the near 300 lawyers for the American Civil Liberties Union do. That’s an impossible task, since the ACLU has already filed close to 150 lawsuits against the Donald Trump administration alone.

Or you could decide, as I did, that “The Fight,” like a cinematic version of “Goldilocks and the Three Bears,” does it just right: It picks four cases that give a good overview of the ACLU’s work and all carry huge stakes; it follows lawyers who are articulate and interesting guides through the issues; and it gives each of the cases enough time to play out and also add up to a rich portrait of a complex organization.

Also Read: 'The Fight' Producer Kerry Washington on Why ACLU Lawyers Are 'Our Avengers' | Video

An exemplary work of nonfiction storytelling that won a special jury prize after its premiere at Sundance, the film from directors Elyse Steinberg, Josh Kriegman and Eli Despres and producer Kerry Washington won’t persuade those who, in this hyper-partisan age, look upon the ACLU as left-wing zealots (even though it has also fought for things like allowing the far-right protestors in Charlottesville to march, a decision that the film makes clear was the subject of much internal dissension).

But for those who consider the current administration a dangerous one, “The Fight” is a stirring chronicle of resistance in a crucial battleground, the courts. And it’s one who gives us gloriously human heroes – the immigrant rights advocate who’s eloquent arguing cases in the courtroom but inept when his cellphone battery runs down, the transgender lawyer who’s reluctant to argue a trans case because he thinks the case might be stronger argued by a cisgender lawyer.

Lee Gelernt, one of the ACLU’s highest-profile lawyers, is the immigrant rights advocate, who is seen in the film challenging the Trump administration’s ban on immigrants from predominantly Muslim countries. Chase Strangio is the trans lawyer, who in the film works with fellow attorney Joshua Block to challenge the ban on transgender people in the military. Brigitte Amiri from the ACLU’s Reproductive Freedom Project is shown advocating for a pregnant teenage immigrant who has been barred from accessing abortion services, while Dale Ho files suit to stop the administration’s proposal to add a question about citizenship to the 2020 census.

Those four cases overlap throughout “The Fight,” but there’s never a letdown when the film shifts from one to another, and never a feeling that any of the lawyers or their cases are being shortchanged by the filmmakers. Made up of verité footage interspersed with talking-head interviews, the film is in some ways an ad for the ACLU, albeit one that takes the measure of some troubling history – but it is also an enlightening and even exciting look at a fierce battle for the future of this country.

If you’ve been following the news for the last few years – and if you haven’t, this isn’t really a movie for you – then you probably have a good idea which of these lawyers succeed. Suffice it to be said that while the ACLU encounters its share of disappointments in the film, it also scores some resounding victories.

But a couple of things hang over the organization. One is the violence in Charlottesville in 2017, which some in the ACLU think was made possible by the legal support it provided for the far-right marchers. And the following year saw the unexpected retirement of left-leaning Supreme Court Justice Anthony Kennedy, who was replaced by the second Trump appointment, the far more conservative Brett Kavanaugh.

Those events deepen the sense that the ACLU is not exactly tilting at windmills, but definitely fighting an array of formidable foes. At one point in the film, Ho says that he was looking forward to the 2016 election because he figured he’d be able to spend more time with his family once it was over – but then Hillary Clinton lost to Donald Trump and everything changed.

“If I’m not going to be a civil rights lawyer now, then when?” he asks.

“The Fight” has an answer, which is that the time is now. It’s an answer that may well hit home with many of the film’s viewers – and while Ho also says, “it’s not going to be lawyers in court, it’s going to be people who turn the ship around,” the film also makes it clear that those people will probably need some really good lawyers to do it.

Magnolia Pictures and Topic Studios release “The Fight” in theaters and on-demand on July 31.