Jessica Chastain was eager to work with Ralph Fiennes again on their new movie “The Forgiven,” the first time they’d shared the screen in more than 10 years. But this time she joked with him that she had a condition: their characters had to at least like each other a little.

On the Shakespearean drama “Coriolanus,” Chastain and Fiennes played a married couple “who don’t really connect,” as she put it. This time around, they’re a couple on the brink of a divorce, but at least they have a more polite backstory this time around.

“I was joking with him and said, the next time we work together, please let’s be friends, or at least let’s be married people who actually like each other,” Chastain told TheWrap’s Steve Pond at the Toronto International Film Festival. 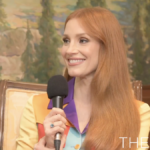 Chastain stars in “The Forgiven” alongside Fiennes as one of her two films at TIFF, the other being “The Eyes of Tammy Faye.” In “The Forgiven,” directed by John Michael McDonagh, they play a wealthy couple on a trip in Morocco but also on the brink of a divorce. When Fiennes’ character accidentally hits a young man with his car, the two hide the body and try to attend the party, getting into a night of debauchery as though nothing happened, only to have to reckon with their problems the next morning.

“The book and the film really explores a class system, gender roles, racism, and it explores so much of the other and also this idea that if people have money, they think they can just go anywhere and do anything without the ramifications,” Chastain said. “They are very sadly mistaken by that.”

Even though much of their backstory doesn’t come up, Chastain and Fiennes worked closely to understood each of their characters’ backstory and years of romance and resentment that’s under the surface, even whether they’re intimate or how they got together in the first place.

But Chastain also said she was destined to play this part, having read the book on which it was based and actually twice being offered the role, including with another creative team that failed to bring the project to the screen.

While not at the festival, Chastain also has another project about marriage, “Scenes From a Marriage,” in which she stars with Oscar Isaac. Chastain said she was also worried about the relationship they might have after they were done filming.

“It was brutal. Oscar and I, we have great love for each other, we trust each other completely, and it’s painful. We can read each other’s minds, we can make each other laugh when we want to. But we can also really really hurt each other if we want to,” she said. “I would come home and say to my husband, I don’t think Oscar and I are going to be friends after this. I can’t look him anymore! (laughs) We’re fine now though.” 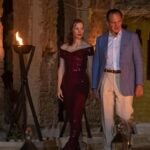 Check out the full interview with Jessica Chastain on behalf of “The Forgiven” and “The Eyes of Tammy Faye” above.