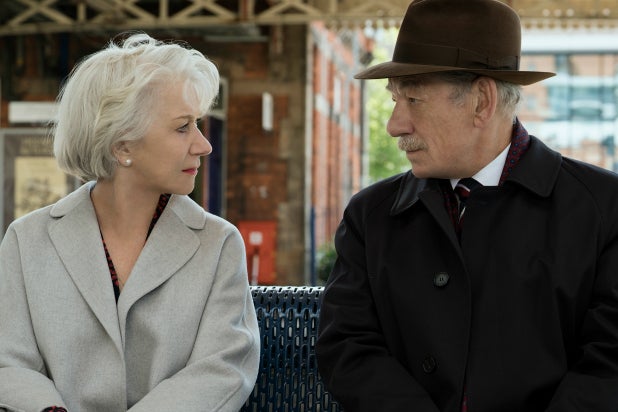 “So little is what it seems to be,” the press notes for “The Good Liar” promise. And that’s true, in the sense that one might expect a great deal more from a project that brings together so much talent.

Helen Mirren and Ian McKellen get to act opposite each other for the first time ever, under the direction of estimable filmmaker Bill Condon (“Kinsey”). Together, this trio boasts eight Oscar nominations. In fact, Condon won an Academy Award for writing “Gods and Monsters,” which also earned McKellen a nod.

So what strange sleight of hand conspired to drain all the life out of their torpid crime drama?

Adapted by Jeffrey Hatcher (“Mr. Holmes”) from a novel by Nicholas Searle, “The Good Liar” really wants to be either a thriller or a caper. Unfortunately, it has neither the excitement necessary for the former nor the fun required of the latter. Instead, we get a ponderous plot that begins when two retirees meet up for dinner after tentatively connecting on a dating site. Roy (McKellen) is a former soldier with an estranged son and a bum knee. Betty (Mirren) is a suburban widow hoping to make the most of her golden years.

We learn early on, via the movie’s only entertaining set piece, that Roy is really a professional con man. He seems to be a grand-scale swindler, so it’s unclear why he’s also courting mild grandmothers. Regardless, in one of many convenient and entirely unbelievable turns, Betty almost immediately suggests that Roy move into her guest room.

Although Roy’s been working on side grifts with his friend Vincent (Jim Carter, “Downton Abbey”), Betty’s unexpectedly large savings account sharpens their focus. Before long, Vincent is showing up at the house as Roy’s financial advisor, to drop the casual suggestion that Roy and Betty combine their accounts. Although there is no chemistry between them — neither ever shows much genuine interest in the other — and Betty’s post-collegiate grandson (Russell Tovey, “Years and Years”) expresses considerable suspicion, she cheerfully agrees to hand over every dollar she owns.

Why? After all, Mirren doesn’t play Betty as the sort of naïve fool who would normally walk into a risky plan with no qualms. The truth is, though, that neither actor seems to have a strong enough grasp on their character.

This isn’t their fault; both Mirren and McKellen are smoothly professional all the way through. And there’s always pleasure to be found watching top-class actors loosen up in a low-stakes setting.

Watch Video: 'Catherine the Great': Helen Mirren's Russian Empress Gets Steamy With Jason Clarke, But 'Will Not Share' Her Throne

But Hatcher’s script doesn’t offer them any realistic motivations, and Condon is fatally ambivalent about how much he wants to share until the end. Moreover, there is no one to root for: Roy is exposed immediately as a villain, and Betty doesn’t have the vulnerabilities or personality quirks that might inspire empathy.

Carter Burwell’s insistent score constantly primes us for something Big and Ominous, while cinematographer Tobias A. Schliessler (“A Wrinkle in Time”) approaches even sunny settings in portentously dark fashion. You won’t find any spoilers here that aren’t already in the title, but suffice to say there are no great surprises in a movie that should be throwing them out around every corner.

There’s only one truly unpredictable twist in “The Good Liar,” and that’s the disappointment audiences are likely to feel when they leave the theater.