Netflix has released the first trailer for “The Gray Man,” the $200 million plus spy and espionage thriller that stars Ryan Gosling and Chris Evans. But they definitely don’t get along in this one.

Gosling is part of the Sierra program, a team of “reckless mystery men you guys send in when you can’t officially send anyone else.” He’s known as The Gray Man, and according to Chris Evans’ Lloyd Hansen, “he’s got some street cred.” But he’s apparently outlived his usefulness, and has become an important target.

Hansen is determined to hunt him down, and enlist anyone he needs to to get it done. Of course, the men have some pretty good banter along the way.

You can watch the full trailer for “The Gray Man” in the video here and above.

Joe Russo wrote the script with “Endgame,” “Infinity War,” “Civil War” and “The Winter Soldier” writers Christopher Markus and Stephen McFeely based on the book and series “The Gray Man” by Mark Greaney. “Avengers: Endgame” directors Joe and Anthony Russo directed the project. 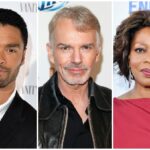 The Russo Brothers’ AGBO will produce the film, brothers and Mike Larocca listed as producers along with Joe Roth and Jeff Kirschenbaum for Roth Kirschenbaum.

“The Gray Man” — which has the potential to become a franchise at Netflix — will be released in select theaters on July 15 and will debut on Netflix on July 22.

The book series dates back to 2009 and was followed by eight sequels. They were meant to be turned into a franchise in the past, including with “Mission: Impossible” director Christopher McQuarrie attached and in a separate project starring Brad Pitt as directed by James Gray.