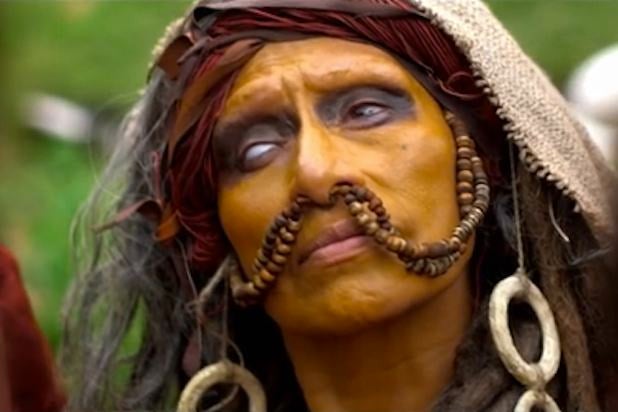 Eli Roth‘s cannibal horror flick “The Green Inferno” will finally make its theatrical debut Friday after rounding the festival circuit back in 2013, but critics aren’t necessarily happy to see it.

The film, an homage to horror films from the 1970s and 80s, follows a group of college students who travel into the Amazon, hoping to start a social media campaign to protect the indigenous population from an evil corporation’s bulldozers. However, things go awry when their plane goes down above the forest, and the students become the victims of the cannibalistic natives.

Though critics have praised the movie’s sly criticism of campus activism, the gory R-rated release from Blumhouse’s BH Tilt label has received only a 43 percent approval rating from the 40 reviews counted on Rotten Tomatoes.

“Those stabs at commentary and homage are overshadowed by the fact that the film’s flat depiction of indigenous tribes as feral, rapist savages is just another echo of dehumanizing depictions of native peoples previously used to justify colonialism and genocide. That’s the dictionary definition of “adding insult to injury,'” TheWrap’s Inkoo Kang wrote in her review of the film. “At best, ‘The Green Inferno’ is a reliable shock and disgust-delivery system. At worst — and it certainly veers toward the worst — it’s a racially reprehensible work that exploits one of the world’s most powerless peoples,” she concluded.

Read eight of the critics’ most disgusted responses below:

“The film is a case of contradictions: It proudly boasts people indigenous to the Amazon rainforest who’ve had no outside contact, only to exploit and depict them as cannibalistic savages. The movie doubles as a political and environmental allegory like so many horror classics but mocks student activists and makes victims out of those who attempt to halt the encroaching bulldozers. And though citations of 1970s and 1980s Italian cannibal films during the end credits suggest high-minded scholarship, the film gleefully revels in sophomoric cheap shots such as exposed genitalia and explosive diarrhea.”

“The film reawakens long-repudiated notions of white supremacy and such, but Mr. Roth is surely not trying to peddle them. He’s merely seeing if he can replicate the formula of the subgenre. And he does, fairly slickly, in fact. Is there some artistic reason for doing so? Not really.”

“Enjoying this rancid slab of red meat depends not just on an appetite for slop, but also a taste for sloppy leftovers. Like every one of the filmmaker’s prior features — ‘Cabin Fever,’ his two ‘Hostel’ movies, and ‘Aftershock’ (which he co-wrote and starred in, but didn’t direct) — ‘The Green Inferno’ sends a gaggle of boorish college kids out of their protective bubble of privilege, where certain doom awaits. The scenery in Roth’s movies may change, from the Deep South to Eastern Europe to Chile, but the warning remains the same: Stay where you belong, ugly Americans, or the world will eat you alive.”

“Roth is a very deliberate fellow, and he has a real theme. The horror in ‘The Green Inferno’ unfolds amid lush, verdant settings, which puts it squarely in the American tradition of satirizing “civilized” writers and painters who celebrate an ecstatic spiritual oneness with nature. That tradition goes back at least as far as Melville’s ‘The Mast-Head’ chapter in ‘Moby-Dick,’ but Carl Hoffman’s recent history/travelogue ‘Savage Harvest’ underlines (more than once) the irony of Nelson Rockefeller and his ilk prizing “primitive” New Guinea art at the same time the artists were pulling out his son’s entrails and roasting his limbs.”

“Funnier than it is scary and grosser than it is funny, ‘The Green Inferno’ features a number of early scenes that would appear to be setting us up for a slacker comedy … If this feels less sadistic than, say, either ‘Hostel’ movie, it also gives little reason to do anything more than roll your eyes when things go pear-shaped. There are a few clever moments throughout their ordeal — try not to laugh at how casually the tribeswomen chat while preparing a dead body for cooking — but not enough to elicit much goodwill.”

“Whatever criticism you want to throw at Roth, at least the director stays true to his singular, repulsive vision: His cannibals-gone-wild tale is a work of unrelenting and squishy terror. Guts are spilled, eyeballs are gouged and the threat of vaginal torture is waved around like Chekhov’s gun.”