Instead, studios continue to mount massive P&A spends — most of it on television — when the social ecosystem offers a much cheaper, more targeted alternative, Luckett said during his keynote, “Hollywood and Social Media,” at the Beverly Hills Montage.

“It’s a status-quo mentality to spend tremendous amounts of money through broad campaigns,” he said, criticizing the “notion that you spend $100 million on TV ads, especially when the data tells you that your 18-to-24 audience isn’t even watching TV.

“That doesn’t make any sense to me,” said Luckett, whose WME-backed venture has become a go-to in Hollywood for building social outreach for brands, individuals and marketing campaigns. 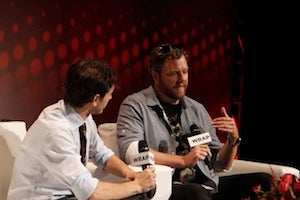 Luckett said his venture began at a dinner with Ari Emanuel, who “was fascinated with this concept that the future of actors and entertainment brands was inside of social systems — and directly connected to the consumer.”

Now TheAudience manages the social presence of hundreds of celebrities, reaching about a billion people per month, Luckett said. But TheAudience isn’t a proxy for talent being active on the social graph – it only works, he said, when they’re working with a willing and savvy participant.

“We like celebrities who value this, so we’re not pulling teeth,” he said. “You need cooperation – we’re just an extension. We can’t speak in their voice.”

“He’s reaching about 35 million people per month on Facebook alone,” Luckett said. “He loves what he does – he gets the joke, he has fun with it.”

Also read: TheGrill: Bill Maher on Why He’ll Never Win an Emmy – Not ‘If You’re Gonna Be the Brave One’

And it’s not just a matter of starting and maintaining a Facebook page or YouTube channel, Luckett said – you have to know what works out there.

“You’re dealing with a different medium, so you need someone who can participate with the joke,” Luckett said. “People who understand that this medium is not TV, it’s not PR . It’s something you need to learn. You need fun, interesting content that trends inside Buzzfeed or throughout the graph. When people understand that, they’re a joy to work with.”

There comes a point, however, when artists and celebrities need to be compensated for that effort and expertise, Luckett said. And that’s where Hollywood doesn’t get it.

“If the data says you should try to reach XYZ directly through the social graph, why aren’t you putting your resources there?” Luckett said. “Studios don’t want to pay (talent) to market the movie – ‘Oh, we’re paying him already’ – well, you’d be paying pennies on the dollar to reach 30 million people. It’s just so obvious.”

He pointed to “Spring Breakers” and “The Spectacular Now,” two projects TheAudience worked closely with A24 on in recent months, as examples of films where cost-effective marketing campaigns leveraging social paid off.

“Each of these movies has had some of the highest per-screen averages this year, and very little, if any, traditional marketing goes into those movies,” Luckett said. “Those are almost entirely social.”