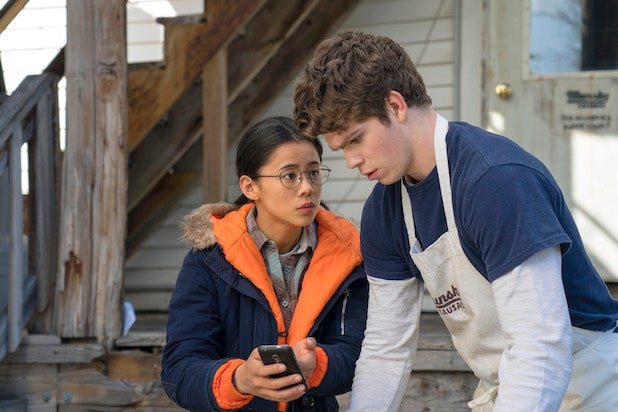 “Cyrano de Bergerac” sure gets around. Ever since Edmond Rostand’s play about the 17th-century French dramatist became boffo box office in 1897, the story has been adapted countless times in countless ways. Ayn Rand used it as inspiration for the 1945 movie “Love Letters,” which was set in World War II; “Electric Dreams” gave it a 1984 sci-fi spin; Steve Martin’s “Roxanne” transplanted it to a Washington firehouse; “Futurama” and “Bob’s Burgers” both used it as inspiration for animated TV episodes; and Netflix borrowed from the story for “Sierra Burgess Is a Loser,” a teen comedy that aired in September 2018.

Those projects only scratch the surface of Cyrano spinoffs, and there’s still life in the old guy. In fact, Netflix is back on the Bergerac beat with Alice Wu’s “The Half of It,” which premieres on the service on Friday. That’s only two days after the film won the Founders Award for Best Narrative Feature at the 2020 Tribeca Film Festival, which gave out its jury prizes even though the festival itself didn’t take place.

“The Half of It” isn’t necessarily the kind of movie you’d think would take the top jury prize at a major film festival; it’s a charming, light comedy that goes down easy and is distinguished mostly by how it takes the Cyrano story to high school and mixes in emojis, diversity, immigration, LGBT issues and lots of other stuff to set it in today’s world.

Also Read: Tribeca Film Festival Gives Jury Awards to 'The Half of It,' Steve Zahn Despite Cancellation

The important thing about it, really, is that it marks the return to feature directing for Wu, who made her film debut in 2005 with the well-received “Saving Face” but hasn’t directed a movie since then. Maybe Hollywood didn’t know what to do with a gay Asian female voice for the last 15 years, but it’s about time they figured it out: If Wu can take her voice and make it fit into a French play from 1897, she certainly ought to be able to get work in 2020.

In “The Half of It,” the Cyrano figure — which is to say, the smart and eloquent person who helps a sweet lunkhead woo the beautiful girl that they both desire — is Ellie Chu (played by Leah Lewis), a bookish Chinese-American student who has a thriving sideline as a term-paper ghostwriter for classmates who otherwise mock her as a nerd. She’s not in the love-letter business, but she makes an exception when the none-too-bright second-string tight end Paul Munsky (Daniel Diemer) begs her to punch up a rather pathetic missive he’s written to the dreamy Aster Flores (Alexxis Lemire).

The ghostwriting gig grows to include ghost-texting, study sessions and surveillance, and Ellie embraces it – because, in true Cyrano style, she’s secretly in love with Aster, too. This setup has been leading to complications for about 120 years, and of course, it does so here, too, in a tolerant Young Adult way that is buoyed by the easy chemistry between Lewis and Diemer.

There’s more to all of the main characters than we initially see. Ellie is so wrapped up in her own identity as a loner that it never even occurs to her that there might be people who’d want to be her friend; it takes a long time for Paul to show a spark of what might make him interesting to anybody, but it comes out eventually in his sausage-making, of all things (and no, there’s no double-entendre in that phrase); and Aster is smart enough to know and articulate the perils that come with being the pretty girl.

Everything comes crashing down in a church on Easter Sunday, which lets Wu bring religion into the mix alongside sexuality and identity. It’s a little chaotic and messy, but also sweet and funny and eclectic in its sources: Ellie may be a Cyrano stand-in, but she gets her inspiration from Camus and “Casablanca,” from Jean-Paul Sartre and Kazuo Ishiguro and “The Philadelphia Story,” from the ancient Greeks and even from a sappy song by Chicago that her late mother loved.

And in the end, she figures out that maybe Sartre was wrong — maybe hell isn’t other people after all. Words to remember, perhaps, in these times of isolation.