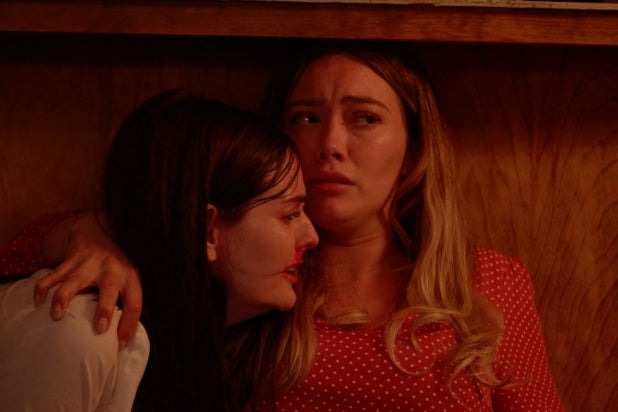 On the night of August 8, 1969, Sharon Tate, Jay Sebring, Wojciech Frykowski, Abigail Folger and Steven Parent were brutally murdered by the Manson Family. It was one of the most shocking and horrifying crimes of the 20th century, a tragedy that still reverberates 50 years later.

And now… there’s a really bad slasher movie about it.

“The Haunting of Sharon Tate” is a ghoulish film that dramatizes these heinous slayings like a particularly tacky pulp thriller, using snippets of documentary footage to remind us that this story is true and deserves more respectful and nuanced treatment than writer-director Daniel Farrands (“The Amityville Murders”) seems able to provide. The lives of Tate, Sebring, Frykowski, Folger and Parent are reduced to stock horror archetypes, trapped in an underwritten and ultimately insulting thriller, with a conclusion that strives for profundity and fails in spectacular fashion.

Watch Video: Hilary Duff Fights for Survival in Trailer for 'The Haunting of Sharon Tate'

Farrands’ film takes place over the days leading up to these despicable slayings, as Tate (Hilary Duff) and her friends take sunny swims and ponder, pointedly, that their street name at 10050 Cielo Drive means “heaven” in Spanish (a definition which is, at best, a stretch). It’s so bright and bubbly that the first act plays like an old-timey gangster movie, with Fate itself playing the guy who mutters, “Nice life you got here; sure would be a shame if something were to happen to it.”

As the clock ticks down to the inevitable violence, Tate experiences a series of tacky jump-scares involving rattling ice machines, reel-to-reel audio tapes that mysteriously play Manson’s song “Cease to Exist” all by themselves, and shots of the Manson Family suddenly peering through windows in the background à la “The Strangers.”

Meanwhile, the film’s ensemble is saddled with comically exposition-laden dialogue that wouldn’t pass muster in the weakest “Friday the 13th” sequel. (And Ferrands would probably know — he’s previously directed documentaries about both the Jason Voorhees and Freddy Krueger franchises.) Tate and her friends have a ridiculous habit of describing themselves in awkward detail, just in case an audience is watching them and needs a quick primer.

So we get painful moments in which Jay Sebring (Jonathan Bennett, “Mean Girls”) is declared a “stylist to the stars” and Wojciech Frykowsky (Pawel Szajda, “Imperium”) is told by his girlfriend, Abigail Folger (Lydia Hearst, SyFy’s “Z Nation”), that that Sharon Tate is married to his best friend, filmmaker Roman Polanski. Just in case Frykowsky forgot or something.

Polanski, who was in Europe at the time of the murders, only appears briefly in documentary footage, but his presence is felt throughout. Partly because he calls Tate in a dream sequence, and partly because when Tate tells her friends she’s scared for her life, they exclaim, “This isn’t one of Roman’s movies!”

“The Haunting of Sharon Tate” takes inspiration not just from the murders, but from the story that, one year previous, Tate described a seemingly prophetic dream in which she and/or Sebring were murdered in a similar fashion. Farrands takes this premise and uses it to fill his film with rug-pulling nightmares and ruminations on fate. It’s embarrassingly on-the-nose for Tate to ask her friends if they feel like they’re “slaves to their own destiny” in a film that’s already leading to a gruesome, foregone conclusion.

“The Haunting of Sharon Tate” plays like a snuff film: The audience has been invited to watch these real people die, in a movie that has very little to say about their untimely deaths. There’s no context or insight, only a misguided conclusion that offers no catharsis, no deeper meaning, and — at best — only a superficial empathy for these people and their tragedy.

Practically every scene in “The Haunting of Sharon Tate” lands with a thud, sometimes forcing characters to change personalities mid-sentence, like when Steven Parent instantly transforms from awkward kid to ranting conspiracy expert when he discovers (gasp!) that Charles Manson used back-masking in his music. His voice lights up as he puts two-and-two together, raving about “Satanic messages” and “prophecies,” and he straight-up marvels at Manson’s uncanny technical genius: “All I can say is someone went to a lot of trouble to make this thing.”

The cinematography by Carlo Rinaldi is functional at best, and the editing by Dan Riddle chooses some of the worst possible moments to insert documentary footage, reminding us that these murder victims were real people who deserve better than this. Among the cast, only Duff makes any impression. But even her performance gets mired in repetitious mannerisms and inflections, and rarely seems like anything more than a passable imitation of Tate, who had significantly more magnetism than anyone could find in Duff’s performance, or in the rest of this film.

“The Haunting of Sharon Tate” is an astoundingly tasteless motion picture, perfunctorily produced and insensitively conceived. Although Daniel Farrands teases the possibility that he’s got something truly experimental on his mind, the film ultimately reveals itself to be a grotesque sightseeing tour of human misery, exploiting five tragic deaths for cheap matinee scares.