This review of “The Humans” was first published on Sept. 12 after the film’s premiere at the Toronto Film Festival.

The threat of impermanence or, looking at it another way, the threat of unfulfillment’s permanence, hovers like a cloud over the Blake family Thanksgiving dinner that makes up the running time of writer-director Stephen Karam’s “The Humans.”

The title of Karam’s Pulitzer Prize–winning play is curiously bold and blasé, like words you’d see in an elegant font on a stand next to a zoo exhibit. But over the course of a three-generation, six-person get-together in a mostly unfurnished, ghostly New York apartment, Karam’s characters reveal what is edgily real about modern existence and what’s eternal about trying to survive it.

Karam makes his directorial debut adapting his widely acclaimed work, and it’s not surprising he’s assembled a formidable cast: Jayne Houdyshell (the only crossover from the Broadway production, and a Tony winner for it to boot), Amy Schumer, Beanie Feldstein and Oscar nominees Richard Jenkins, June Squibb and Steven Yeun. He’s also done his utmost to swap out proscenium-like theatricality to take advantage of what cinema can do with close-ups, angles, movement, sound and pacing, all in tight-yet-spacious prewar Manhattan digs that production designer David Gropman (“Fences”) has made into a weary, old, possibly malevolent seventh character. 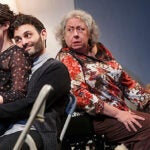 The effort that’s gone into creating a work of dimensionalized precision about the way people talk, talk over and talk past as they move through a space together, is of a relentlessly high caliber of authenticity. But that also gives this finely tuned movie a distancing problem with regards to the expression of its characters’ specific concerns, which amount to variations on loss: of love, of passion, of economic stability, of sanity and of life. It’s very possible that in the shifting molecules of a live production performed for an attentive audience, Karam’s gifts are more directly felt; here, they’re more admired than absorbed.

As movie vibes go, however, there’s an artfully palpable unease in the beginning as Scranton, Pennsylvania-native Erik Blake (Jenkins) — alone in the Chinatown apartment his younger daughter Brigid (Feldstein) is moving into with her older boyfriend Rich (Yeun) — considers the stained walls, startling noises and smudged windows that look onto an interior courtyard. (Upward views of slivers of sky surrounded by tall buildings are the movie’s evocatively cramped opening-credits imagery.) Though ostensibly there to celebrate a holiday and a loved one’s new home, the atmosphere suggests we could be in for either a domestic comedy-drama or a haunting.

The richness of Karam’s scenario is that it’s both. When the rest of the clan shows up — Erik’s wife Dierdre (Houdyshell), their older daughter Aimee (Schumer) and Erik’s dementia-suffering, wheelchair-bound mother Momo (Squibb) — preparations begin for a folding table feast and conversation gears up. But wedged in amongst the teasing, fond memories, humorous anecdotes and spoken affection are lingering anxieties and fears, sharp tongues and eye-opening revelations. Worries and bitterness about money are one constant. Mortality another. All while mysterious jolts of noise continue, lights falter, and family members occasionally need to navigate a darkness that’s sometimes literal and often verbalized.

The actors’ top-notch characterizations are a matrix of fault lines and abiding love, starting with Jenkins’ mix of genially judgmental bonhomie and crippling unease, and Houdyshell’s sturdily epic mom-ness. Feldstein and Schumer are believable sisters with veneers of wit they hope will keep sensitivities and disappointment at bay. (Schumer, especially, beautifully underplays her character’s truly woeful circumstances.) As sweet-natured Rich, Yeun captures the gently nervous energy of fitting in with a new family, while Squibb has to seem there but not there, and does so perfectly. 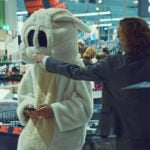 Key to the everyday rhythm of Karam’s dialogue is that the Blakes are too close-knit to let a needling joke or biting remark foul the mood — these aren’t laugh lines or shock lines, just the stuff that’s blurted out when you know people well — and yet the overall tone is very much one of being on the knife’s edge. It’s a Polanski-like, Pinter-esque approach to close quarters very much enabled by Lol Crawley’s (“Vox Lux”) low-light cinematography and the editing from Nick Houy (“Little Women” 2019).

But in the aggregate, Karam’s directing is so meticulously composed about conveying the density of what’s unsaid, and the mood around the people instead of the people creating the mood, that “The Humans” can feel a bit suffocating. The movie barely breathes, which has its place at times when the chatter hits a snag over an awkward comment or a character is alone. (And maybe, in that creepy apartment, not.) But the repeated use of far-set angles to signify we’re overhearing the Blakes, not in their presence, and the cutaways to close details (ominous discolorations, fixtures, cracks, pipes) begin to feel forced.

For so confidently crafted a film, it’s an unfortunate misstep, because the fact that Karam showed thought at all in translating his work to the screen automatically puts him in a league apart from the many careless shooters in today’s director’s chairs. I would even say Karam is someone to watch because his mindfulness is to be applauded, even if for “The Humans,” it fosters an appreciation for the parts over their effectiveness as a whole.

“The Humans” opens in U.S. theaters and on Showtime November 24.