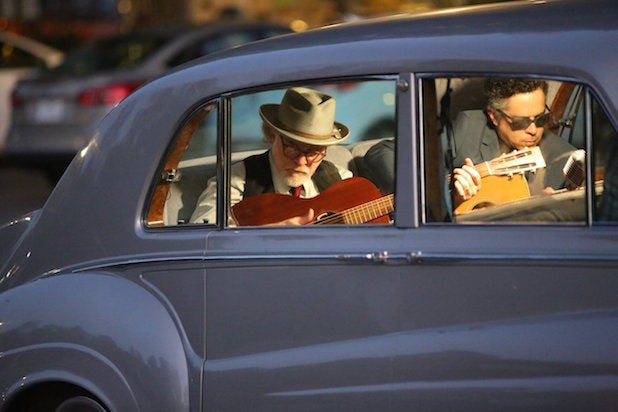 Director Eugene Jarecki’s “The King,” an audacious travelogue that views America through the windows of Elvis Presley’s Rolls Royce as well as the prism of his career, challenges viewers to embrace the Elvis-as-America metaphor. Some may resist the ride, but those who climb in will be rewarded with a sharp, provocative and surprisingly emotional work of cultural and political criticism.

Jarecki’s big, bold and overreaching film — a trimmed and re-edited version of the documentary that screened at the 2017 Cannes Film Festival under the title “Promised Land” — is in love with but also skeptical of its own central metaphor of Elvis’ career as a version of America’s own history. Executive produced by Steven Soderbergh, Rosanne Cash and Errol Morris, this is a film about the poor boy who loses himself in a rich man’s life and ends up stuffed into a spangled jumpsuit, and about a country’s promise of freedom being choked by the excesses of greed.

And if that means it sometimes gets confused and messy, so be it. “What do you think I’m doing with this movie?” Jarecki asks his road crew manager, Wayne Gerster, at one point.

The thing is, you can do that with Elvis. He was simultaneously the ultimate American Dreamer, a working-class kid from the South who rose until he had the world at his feet, and the ultimate American tragedy, utterly undone by his inability to cope with what he achieved. Celebrity, revolution, cultural appropriation, capitalism, addiction — it’s all there in a man who embodied promise fulfilled and promise betrayed.

And over the course of Elvis’ lifetime and after his death, you could say the same about an America that now seems hopelessly divided and increasingly mean, led by a rich man with a taste for excess that dwarfs even Elvis’.

So if you want to take the measure of Elvis and in doing so take the measure of America, why the hell not? It might not always work, it might occasionally get scattered, but it might also be glorious. And “The King” is all of those things; it’s smart enough to know when it’s being silly, and bold enough to not care that it tries to do too much.

Jarecki, whose previous films include “The House I Live In” and “Why We Fight” (about the war on drugs and the military-industrial complex, respectively), starts with a premise that is some kind of weird stroke of genius: In an election year, the director took a road trip from Tupelo to Memphis to New York to Los Angeles to Las Vegas, along the way giving a bunch of people rides in the back seat of a Rolls Royce once owned by Elvis.

Now, we all know that Elvis was a Cadillac man, but he did once own a Rolls, and Jarecki found it. The central conceit of “The King” inevitably calls to mind the 1990 song “Elvis’s Rolls Royce,” written by the weirdo art-funk band Was (Not Was) and sung by Leonard Cohen, with a couplet that might as well have been this movie’s logline: “I steered my precious cargo/Through the belly of the beast.”

Jarecki’s passengers include Ashton Kutcher, James Carville, Alec Baldwin and an array of musicians who perform music in the song’s back seat, among them the preternaturally gifted preteen singer Emi Sunshine, bluesman Bud Welch, gospel singer Erlis Taylor, rootsy Northern California singer Nicki Bluhm, doomy Americana group the Handsome Family and singer-songwriter John Hiatt, who cries when he slides into the car and realizes “just how trapped [Elvis] was.”

(There’s a killer concert movie on the cutting room floor, and Jarecki is planning to release it in installments on YouTube.)

“The King” is a slightly tighter movie than “Promised Land” was, with less footage of Donald Trump — though Trump is an inescapable presence nonetheless, as a reminder of the ugliness the country has been careening toward on its own bumpy road trip.

And yes, that means that the ideal audience for this movie is liberals who love Elvis and take him seriously (full disclosure: me), though it has plenty to offer anyone with an open mind and a taste for metaphor.

Jarecki is trying to tell an enormous story in bits and pieces — in interviews with struggling working-class families, in the memories of Elvis friends like Jerry Schilling and in cultural historians Peter Guralnick and Greil Marcus and in creators like “The Wire” creator David Simon.

Ethan Hawke, who also served as one of the film’s consulting producers, is on hand to tell his own version of the Elvis story, which is a little odd since Guralnick or Marcus could have corrected the errors in some of Hawke’s accounts without breaking a sweat. Then again, “The King” is less about the details of what Elvis did than its impact and its import; what we hear from Hawke is what Elvis means to him, which is more germane to the film than a technically accurate list of facts.

Meanwhile, Chuck D. sits down for the camera and recites his famous “Fight the Power” line, “Elvis was a hero to most, but he never meant s— to me.” But the Public Enemy mastermind turns out to be generous and compassionate toward Elvis, putting his line in context and then moving on. Not so with author and activist Van Jones, who damns Elvis as nothing but a cultural appropriator and is hostile to the idea that Jarecki would find anything more in the man.

But Jarecki finds lots more, and he puts it all into “The King.” The film starts out fun and is rarely less than affectionate toward Elvis, but it asks tough questions and by the end becomes a wrenching lament for what Elvis lost and what we are losing.

But did Elvis lose it all? Not completely. The final stretch of the film is a powerful montage set to footage of an exhausted, drugged-out Elvis, summoning up everything he has left for an impassioned version of “Unchained Melody” at one of his final concerts.

“I need your love,” Elvis sings, over and over, as American history unfolds: disco, “Scarface,” O.J. Simpson, Iraq, Monica Lewinsky, 9/11, Katrina, Miley Cyrus, Trump’s inauguration, resistance protests … There’s enough life in the performance, and enough light in Elvis’ eyes when he slips into a little grin at its end, that you’re all but forced to find some hope for America as well.

As the grand finale to a grand cinematic essay, the sequence is hugely moving and enormously bombastic in a way that is pure Elvis. And it is a fitting way to end a movie that reaches for everything, knowing it can’t really get there but trying anyway.