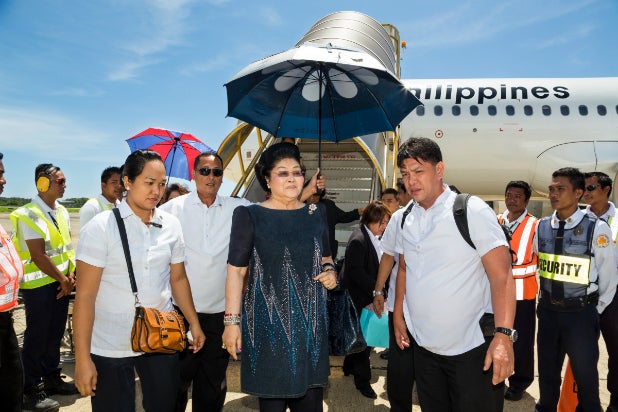 If you didn’t quite meet your Halloween quota, Lauren Greenfield has just released one of the scariest movies of the year. There are no creepy clowns or shambling zombies in “The Kingmaker,” her mesmerizing documentary about the modern political history of the Philippines. But who needs fantasies when reality is so ominous?

Greenfield’s villain appears, in classic form, as an apparent savior. Beautifully dressed and beatifically calm, an octogenarian Imelda Marcos travels the streets of Manila looking for people she can help. She rolls down the windows of her limo to give begging children money. She tours a crumbling pediatric hospital and shakes her head dolefully. When her husband was in charge, she reminds the camera, people never suffered as they do now.

Just when we’re wondering if this sympathetic and benevolent figure might have been a victim of fake news, Greenfield revisits her history to find the facts behind the legend.

Also Read: 'Generation Wealth' Film Review: This Look at the American Rich Wanders in Too Many Directions

For many people outside the Philippines, Marcos is primarily associated with her famously outrageous shoe collection — a symbol of her family’s excess, but also a humanizing detail that has worked in her favor. As long as the media focused on her shopaholic closet, she could be considered a weak or foolish feminine figure. But there’s a reason this movie is not called “The Queen.”

She was, in fact, pageant royalty: a Miss Manila contestant who was courted by Ferdinand Marcos early in his career. The attention she received when they married was so overwhelming that she had panic attacks. But instead of breaking her down, the challenges of being in the public realm built her up. Within months, she had not only adapted to her new lifestyle but dramatically expanded it. As the power behind the power, she possessed all the advantages of extreme elitism while sidestepping much of the risk.

In the ensuing years, her husband relied on a succession of lies, fascism, martial law, and brutal torture tactics to retain his position as president. Meanwhile, Imelda continued to fashion herself as his gracious and beautiful ambassador. She spent millions on couture and rare jewels, so she could charm world leaders ranging from Richard Nixon to Saddam Hussein. She emptied coffers to build architectural testaments to Marcos’ grandiosity. She spared no expense to indulge her wildest fantasies, which ranged from a museum-quality art collection to a private zoo with a truly astounding history.

Eventually, of course, the bill had to come due. And for a while, the system worked as it was supposed to, with the Marcos family paying the price for the extraordinary damage they wreaked upon their country. A snap election in 1986 pushed them out of power and out of the country, Corazon Aquino replaced Ferdinand, and a Presidential Commission on Good Government tried to retrieve some small amount of the billions they stole.

But you can’t keep a good villain down for long. So Imelda doesn’t just return to the Philippines: She also capitalizes on a weary, class-riven, and scared populace. We get a front-row seat as the Kingmaker orchestrates a 21st-century ascension that is an absolute masterwork of political manipulation. And that’s not even the shocking third-act twist.

Greenfield has long been fascinated by the motivations of the .01%, often — as in “The Queen of Versailles” and “Generation Wealth” — exposing the pathos behind the velvet curtains with a clear-eyed empathy. And only an especially agile filmmaker, starting from a place of thoughtful intent, could lead us to wonder whether the willing partner of a populist dictator might have gotten a raw deal. She knows just how to use her remarkable access to Marcos, who is determined to rewrite her legacy before it’s too late. But since both women are unusually gifted storytellers, the film is built in part on genuine suspense as to which perspective will win out.

Marcos innately understands the importance of image, and she can present the woman she wishes to Greenfield’s camera. But she seems to have underestimated her inquisitor, who uses well-chosen historic footage and powerfully-edited interviews with other Filipinos to gradually expand the canvas.

Though Greenfield is too skilled to overplay her intentions, the picture that emerges gains additional power from its clarifying distance. “The Kingmaker” is required viewing for anyone concerned about the direction of their own democracy. But it could also serve as a helpful guide for would-be despots determined to bend reality to their own desire. Still to be determined is the accuracy of Imelda’s personal motto: “Perception is real. The truth is not.”