HBO has unveiled the first trailer for “The Last of Us,” the highly anticipated drama series adaptation of the critically acclaimed video game of the same name.

Set 20 years after the fall of civilization, the story follows Joel (Pedro Pascal), a survivor who is hired to smuggle a 14-year-old girl named Ellie (Bella Ramsey) out of an oppressive quarantine zone. But while the job begins small, it soon becomes a brutal and heartbreaking journey across the U.S. that finds both leaning on one another for survival.

The largely dialogue-free trailer previews a post-apocalyptic epic, albeit one with an intense focus on the characters at the center of the story. Just like the game.

Neil Druckmann, the creator of the video game, serves as co-creator on the series alongside Craig Mazin, who created HBO’s acclaimed limited series “Chernobyl.” Druckmann and Mazin also serve as writers and directors on the show.

Released in 2013, “The Last of Us” quickly became one of the most acclaimed video games in recent memory and was followed by a sequel, “The Last of Us Part II,” in 2020. Sony’s Screen Gems originally tried to mount a film adaptation to be produced by Sam Raimi, but that iteration of the project fell away before HBO greenlit a TV adaptation in 2020.

Troy Baker and Ashley Johnson, who voice the main characters in the games, also appear in the HBO series as different characters.

Watch the “Last of Us” trailer in the video above. The series premieres on HBO in early 2023. 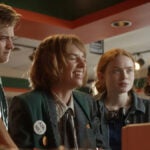