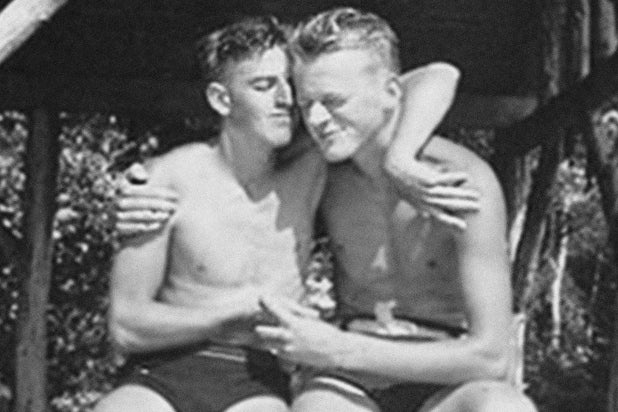 Just in time for the 50th anniversary of the Stonewall riots comes “The Lavender Scare,” a compact and fairly well-made documentary on the purging of homosexuals from government jobs; it began with an executive order from Dwight D. Eisenhower in 1953 — shortly after he was elected president — and only ended in 1995 when Bill Clinton signed an executive order to reverse it.

This is a movie with a clear hero: Frank Kameny, who was fired from his position as an astronomer in Washington, D.C. in 1957 and made it his mission to fight for the rights of homosexuals. Some of his letters are read by David Hyde Pierce, and we only get to see Kameny himself towards the end of the documentary, which details the lives of others who had been fired before him as well as the gay social life in Washington during the 1930s and 40s before the crackdown in the 1950s.

There are odious villains here, most notably a man named Peter Szluk, a security agent at the State Department who is heard in an audio interview gloating over his power to dismiss “sodomites” from their jobs, chuckling over how he “didn’t give a hoot” about sending people to the “breadline.” Szluk’s voice is difficult to take, because he sounds very high-energy and fond of himself, like he thinks he’s really a great guy. When we later hear him talking about gay people who killed themselves after he met with them, including one man who shot himself right after leaving his office, Szluk sounds only mildly regretful.

Kameny sent letters of protest to many politicians in the early 1960s, and the responses he got back were often very nasty. John W. Hanes, a former State Department official, is seen reading his own letter to Kameny out loud, which is much more polite than the others, but when Hanes is asked if he feels remorse for firing members of the LGBT community and destroying their lives, he says, “You cannot spend your time feeling sorry for people” when the process has been lawful and “fair.” Hanes’s bright smile here and politician oiliness is nearly as unsavory as Szluk’s boastful regular-guy voice.

The theory was put forward in the 1950s that gays were “easy marks for red spies,” as one newspaper headline put it, because they could be so easily blackmailed, and so they were ousted from their jobs even though there was no evidence that supported this supposition. Gay people were being fired “on batting average now one a day,” according to a memo that appears on screen. Red-baiting Sen. Joseph McCarthy is heard saying that he was not going to be “dainty” about ridding the government of subversives and would use “lumberjack tactics” if necessary, and all of this is coded macho language in favor of conventional masculinity and against anything that deviates from that.

Madeleine Tress was fired from her first job out of college because she went to the Redskin Lounge, a lesbian bar in D.C., and we hear her account of this firing as read by Cynthia Nixon. Carl Rizzi worked at the U.S. Postal Service and did drag at night at the Golden Key Club, and he remembers being defiant with investigators when they showed him a picture of himself in drag, telling them that it was a bad photo and that he could give them a more flattering one for their files. But many gay men and women who were fired from government jobs were ashamed, and essentially tried to disappear, because they knew that they would likely have employment trouble for the rest of their lives.

“The Lavender Scare” is narrated by Glenn Close, who played discharged gay military Col. Margarethe Cammermeyer in a 1995 TV movie, and her voice-over is used to try to smooth over jumps forward and backward in time. Keeping all the players here in balance proves difficult for first-time director Josh Howard, who has based much of his film on a book by historian David K. Johnson.

The sequence that runs right before the end credits is a shambles of information about how some of these stories turned out, set to a cover of “True Colors,” and surely something more orderly would have been truer to the tenor of this story. But “The Lavender Scare” provides a kind of victory lap for a movement that has made surprisingly large strides in recent years. When Kameny refers to some “storybook endings” he has seen, it is clear that he deserves to term them as such.