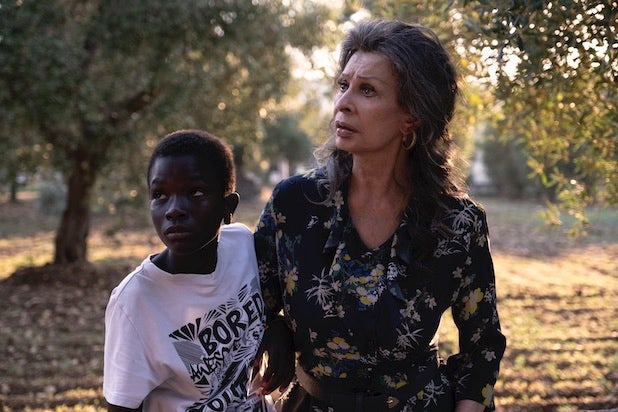 The last time Romain Gary’s novel “The Life Before Us” was turned into a movie, the year was 1977, the film was “Madame Rosa” and the result was an Oscar win for Best Foreign Language Film and a Cesar Award for star Simone Signoret as the title character, a Holocaust survivor and former prostitute taking care of a young Algerian boy.

Gary’s book is now headed back to theater screens (and, in short order, to Netflix) in a new, Italian-language adaptation titled “The Life Ahead,” directed by Edoardo Ponti and starring Ponti’s mother, who happens to be the legendary actress Sophia Loren in her first feature-film role in more than a decade. It’s easy enough to see why she came out of semi-retirement for the film – not only is it the third time she’s worked with her son, after 2002’s “Between Strangers” and the 2014 short “Human Voice,” but it’s one of the meatiest roles a director has given one of his parents since John Huston directed his father Walter to an Oscar in “The Treasure of the Sierra Madre” back in 1948.

As an elderly woman in failing health, Loren is resolutely unglamorous, her face drawn and her hair a tangle of gray. On the surface, her Madame Rosa is all crankiness and bluster, but beneath that is resignation and deep hurt. Loren could have taken the part in a louder, bigger, showier direction, but she’s confident enough not to milk the emotion, and subtle enough to mesh with her remarkable and untrained costar, Ibrahima Gueye.

Also Read: Sophia Loren's 'The Life Ahead,' Her First Film in a Decade, Acquired by Netflix

Gueye plays Momo, a 12-year-old orphan from Senegal (not Algeria in this version) whose mother died when he was 6, killed by her husband when she tried to give up a life of prostitution. Deprived of what seem to have been the only happy moments of his life when she died, Momo is sullen, quick to anger and entirely antisocial; he was thrown out of school for stabbing another student in the neck with his pencil, and he agrees to live with Rosa only because the local drug dealer tells him the location will be good for business.

Rosa takes him in reluctantly; although she’s watched over plenty of prostitutes’ kids since she herself got out of that line of work, she’s made a vow, “No more hookers’ kids running around my house.” But she’s both a tough cookie and a soft touch, so Momo ends up sharing her place with a couple of other children and delivering drugs on the side.

Ponti, who also co-wrote the film, transplants Gary’s story from a neighborhood in Paris to a seaside town in Italy. He’s fond of surveying the action from above, and also of playing up the region’s bright light; even when he’s shooting indoors, there’s often as not some harsh light filtering in from outside to wash out details.

It’s hardly a spoiler to say that Rosa and Momo will come to some kind of understanding over the crisp 94-minute running time, but the film does throw some twists into the narrative as Momo softens and hardens without warning and often seemingly on a whim. The transitions can seem jarring at times, but it’s hard to demand consistency from a troubled preteen, and Gueye gives the character both fire and heart.

“The Life Ahead” is really Momo’s movie, with Rosa as a supporting character; he even narrates the action periodically, though it sometimes feels a bit off to have this kid speaking to us from what seems to be a place of understanding and wisdom.

Loren, of course, still commands the screen, even stripped of her accustomed glamor. Rosa has spent her life being beaten down, and her health and maybe sanity is slipping away, but she has carved out a productive life and also given herself a quiet place of refuge: a room tucked away at the end of long corridors beneath her apartment building, and filled with worn furnishings and a scratchy record player. “Down there, I feel safe,” she tells Momo when he discovers the hideaway that another child had referred to as Rosa’s version of a Batcave.

But there’s more to the refuge than that simple line, “I feel safe” – and while Momo doesn’t understand when she talks about Auschwitz, he’s spent enough of his own time searching for refuge that he can feel what it means to her.

Other characters are nicely drawn, from Renato Carpentieri as the doctor who brings Momo to Rosa to Babak Karimi as a local shopkeeper to transgender actress Abril Zamora as a hooker whose young daughter is also watched over by Rosa. But the heart of the film is in the connection between a 12-year-old boy and an 86-year-old woman, and Loren and Gueye make that relationship rich and touching enough to give life to the movie that surrounds it.