The social lives of animals enthrall the human mind. Finding qualities that resemble us in other species has the power, it seems, to make us feel connected to something beyond our mortal insignificance. It also amplifies our compassion for those creatures.

Proof of this obsession to anthropomorphize them, or at least to reflect ourselves in those traits, is that this year alone we’ve already seen two documentaries on the song of whales: A middling effort in last month’s “Fathom,” and an infinitely more engaging exploration of the history of our interactions with the cetaceans in director Joshua Zeman’s “The Loneliest Whale: The Search for 52.”

To map out the broader topics of this human-whale relationship, Zeman anchors his narrative on a single whale that has caused an online frenzy and puzzled scientists for decades. No one has seen it, but they’ve heard it. Nicknamed “52” because its song registers at 52 Hertz, this mysterious marine mammal is the only one whose voice can be detected at that frequency. This means he (only the males sing) can’t communicate with other whales because they can’t hear his pitch. A language barrier of sorts emerged. 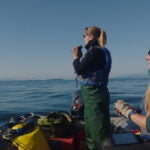 Rather than resigning himself to an unseen position, Zeman is not only the narrator but also the force that materialized a new expedition to search for the elusive 52. For years, the notion that this whale restlessly attempts to communicate without a friend to respond tantalized him. Throughout the film, he doesn’t let us forget that his own long-standing fixation with what hides under the ocean is a major motivation.

Although he never discloses where the resources came from, once the filmmaker confirms there’s a chance 52 is somewhere off the California coast, he assembles a team of scientists and expensive equipment for a weeklong search. This narrative through line in the present is consistently interspersed with historical context or sidebars on related issues that go beyond the global endearment with the singular specimen.

One of those sidebars involves how we became aware of the sounds whales emit by accident, when the U.S. Navy developed a sound surveillance system (known now as SOSUS) to intercept submarines during the Cold War. This technology, and the material they captured, later became useful for oceanographers and researchers such as the late Bill Watkins, who in 1992 was the first one to hear 52. At that point, not even the specific species of this anomalous being, whether Blue or Fin, was known. 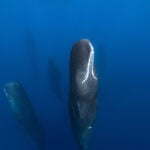 As opposed to “Fathom,” where the heady ideas on the whales’ underwater reverberations are never grounded through their real-world consequences, here, the director and his human subjects make a case for how our knowledge of the undersea mammals’ behavior has altered some of our destructive practices for the better. They expound on tangible reasons why we collectively should be invested, instead of dealing in complete abstraction.

A prime example is the 1970 album “Songs of the Humpback Whale” by biologist Roger Payne, which ignited a movement that considerably reduced the number of whales killed. Hearing them sing connected with the general population like nothing before, and the album went multi-platinum and to this day remains the best-selling nature recording.

Sharply edited by Aaron Crozier (“Jakob’s Wife”) to maintain the viewer’s attention through its many folds, “The Loneliest Whale” integrates archival images, new interviews with experts and footage of Zeman’s laborious mission with a sizable team of people chasing groups of whales and listening in on their exchanges. 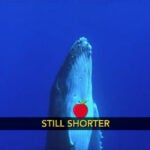 Since the only clue they have is 52’s unique voice, loud commercial ships are a major disruption to their procedures. Most notably, regarding the visual components, the filmmaker also banks video from cameras placed directly on the whales’ bodies to put the audience quite literally in the middle of the action.

However, while Zeman’s enthusiasm is occasionally infectious, his conjectures, explained in voiceover, are riddled with platitudes and self-centered sound bites that say more about an egotistical need to be the first at something, to be the one who found 52, than about our connection with our large swimming counterparts.

On a few occasions at sea, scientists with far more experience in the field than him — who have actually dedicated full careers to studying whales — ask Zeman to temper his expectations and not to make assumptions regarding whether 52 is a hybrid, and other details. These cringe-worthy instances dampen the filmmaker’s personal credibility and highlight the importance of having the other participants to focus repeatedly on the more verifiable results.

Once the excursion comes to an end, the doc reaches a satisfying conclusion that’s never too convenient to make one doubt its feasibility, but still offers hope for the whale in question and his invested fans, Zeman included. If 52, seemingly in solitude and unable to be heard, can eventually get a chance at interconnection, then that means — according, at least, to the themes the director peddles — that such fulfillment is not out of reach for the rest of us. We just need to listen more carefully, to the natural world and each other, in order to understand and be understood.

“The Loneliest Whale: The Search for 52” opens in U.S. theaters July 9 and streaming July 16.