TheWrap awards magazine: “One thing the show does very well is reintroduce characters seen in the background of the original movies,” said Richard Bluff

This story about “The Mandalorian” first appeared in the Comedy & Drama Series issue of TheWrap’s awards magazine.

The second season of Disney+’s The Mandalorian debuted in the fall of 2020 in the throes of a worldwide pandemic and an unprecedented presidential election. But it still managed to be one of the biggest TV sensations of the year, providing loyal fans some clarity on burning questions: Will Mando take off his helmet ever again? What is Baby Yoda’s real name? Will any Jedi make key appearances? 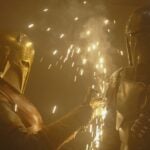 The eight-episode season opened firing on all cylinders with “The Marshal,” an aspect-ratio-bending mini-adventure written and directed by creator Jon Favreau, employing a grand set piece that sits among the Star Wars franchise’s most ambitious eye-poppers: a tense standoff in which the Mandalorian, Din Djarin (Pedro Pascal), agrees to help town marshal Cobb Vanth (Timothy Olyphant) get rid of a livestock-destroying cave creature known as a Krayt dragon. (Think the Beetlejuice sandworms on the ultimate mega-steroids.)

According to visual effects supervisor and matte artist Richard Bluff, eagle-eyed superfans may have seen this creature’s origins in a galaxy far, far away. “One thing the show does very well is reintroduce characters seen in the background of the original movies,” said Bluff, an Industrial Light & Magic vet who has worked on 2005’s Star Wars: Episode III—Revenge of the Sith as well as just about every other blockbuster sci-fi franchise in existence (including Star Trek, Avatar and the Marvel Cinematic Universe). 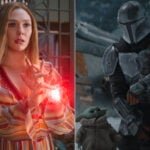 Also Read:
How Disney+ Re-Created Must-Watch TV With ‘WandaVision’ and ‘The Mandalorian’

“The Krayt dragon is the skeleton that you see in the sand as C-3PO and R2-D2 first arrive in Tatooine and are rolling down the hill in the original 1977 film,” he said. “In the original artwork, the creature had many, many legs and the idea was that as it develops throughout its life, it continues to grow legs. And the assumption from the very beginning was that we were going to feature all of these legs, millipede-like, as it moves across the sand.” But then the team decided upon the more tension-building tactic of burying the body under the sand in most shots, letting the audience imagine its behemoth size, much like the characters must before the beast emerges — most frighteningly — in all its toothy, vomiting glory.

The sequence (in which Bluff aided main VFX episode supervisor Joe Bauer) was built within a green-screened L.A. parking lot using backgrounds captured in Chile. Bluff noted that the season overall had somewhere close to 5,000 effects shots, up from about 4,000 for the debut season. “Jon is wonderful at committing to the choices he makes early, which makes it possible for everybody to move through the 5,000 visual effects shots with an awful lot of decisions already made,” Bluff said, noting that even elements requiring postproduction work are planned well in advance. The show embraces matte paintings and tangible artwork, which are also a large part of Bluff’s artistic background. 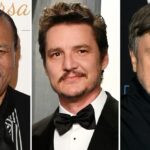 Also Read:
May the 4th Be With You: How ‘Star Wars’ Cast Members Celebrate Star Wars Day

“People assume that the artwork in the end credits is done after the fact to match what we saw in the episode, but it’s actually not true,” he said. “All of that artwork is produced at the very beginning of the process, while Jon is writing. A lot of our work helps inspire the writing and vice versa. We curate what we call the design scape, which can be 200 to 300-plus pieces of artwork that really set the tone for the entire season. It can be costumes, designer weapons, ships…and then that design scape becomes the bible for visual effects. We start executing based upon those design choices, and it’s about 70% to 80% of the world that we’re going to bring to life.”

Real-life crises did occasionally interfere with the carefully laid plans (the seventh episode of Season 2, which features a major action sequence in the jungle, became a fully digitized endeavor), but principal photography was unaffected. “We sadly had to scrap plans to pick up background plates in Hawaii (for that episode), despite the weeks of planning and prep, but California administered a stay-at-home order, and nobody was traveling at that time. So ILM had to gear up and create that entire world. It was really the only episode where we had to reimagine the visual effects differently.”

The original Oscar-winning 1977 film Star Wars turns 45 next year, and there have been leaps and bounds in the advancement of visual effects since then. But Bluff insisted it is not the key reason it has perhaps the most ardent fandom of any franchise in history: “We honestly talk about this in all of our visual-effects reviews. Except for maybe 2001: A Space Odyssey, we had never seen anything like it, this world that was so lived-in. But it’s just classic storytelling. George Lucas did something different that a lot of other filmmakers have never been able to recapture.”