“The Masked Singer” is back with a special Sunday episode where ’90s Night sends Ken Jeong into extreme certainty about Milkshake’s identity.

In an exclusive clip shared with TheWrap, Jeong takes the themed evening seriously by unveiling his guess for who Milkshake is — and it’s not what the other judges think.

While the audience weighs if they think the “Rock the Bells” singer could be behind the bright pink milkshake costume, Robin Thicke axes the guess, noting that he didn’t hear Milkshake licking his lips in between the lines.

Jenny McCarthy Wahlberg is a bit more receptive to the guess and admits Jeong could be right, but points another stylistic element that sends her mind elsewhere. “When I heard jazz, I was thinking: Could this be, like, DJ Jazzy Jeff?” she asks.

However, Nicole Scherzinger is careful not to fall into the trap of conflating the night’s theme with an artist’s identity, suggesting that potential ’90s rap stars could be Nas or Ice Cube.

“I might be crazy, but after that performance, T.I. just came up,” Scherzinger predicts — a guess that sends host Nick Cannon questioning everything. “Yeah, I’ll say it,” Scherzinger continues, “there were peach pits — Atlanta — T.I.’s from Atlanta. There it is.”

When Cannon calls the guess “crazy,” Scherzinger asks the host if he knows who it is. As Cannon responds that he has no clue who the singer is, Milkshake silently turns to the host and makes him second-guess if the masked singer might be someone who knows Cannon better than he thought.

“He’s looking at you like, ‘I might be T.I.,'” Scherzinger says before the judges rethink their previous guesses. “And we’re all wrong,” McCarthy Wahlberg concludes.

Want to find out who Milkshake is? Watch the special airing of “The Masked Singer” on Sunday, Nov. 6 at 8 p.m. ET/PT on Fox. 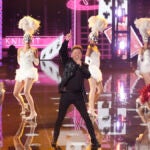