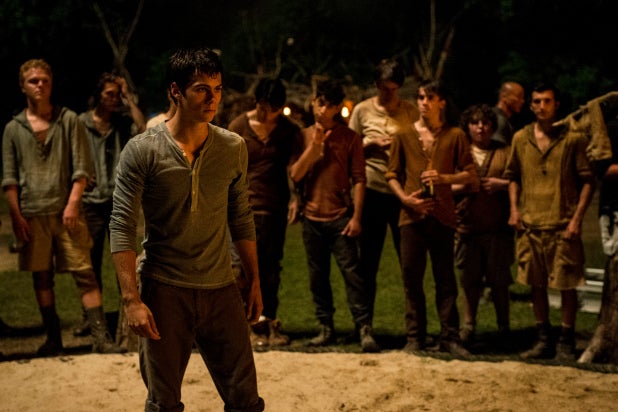 “You’re not like the others.” If there’s a Mad Libs for YA adaptations, that line is pretty much a permanent fixture; at least as far back as the Harry Potter movies, every one of these franchises (from “Hunger Games” to “Divergent” to “The Giver”) revolves around The Photogenic Messiah, the one-of-a-kind teenager who’s better, stronger, smarter, faster, and who winds up saving the world and getting the girl/boy.

That last part doesn’t exactly apply to “The Maze Runner,” since there’s only one girl for our hero Thomas (Dylan O’Brien, MTV’s “Teen Wolf”) to fall in love with, and both of them are too busy fighting amnesia and monsters to make goo-goo eyes at each other. (There are plenty of boys, of course, but that’s a can of worms this movie isn’t about to open.)

Thomas wakes up in a loud (the Dolby sound mix is bowel-rattling) freight elevator, hurtling toward an unknown destination that turns out to be The Glade, a mysterious encampment inhabited by a multi-ethnic group of male teenagers who have been living there for three years. Like Thomas, none of them remember how they got there, or what their lives were before they arrived.

They grow their own food, raise their own livestock and maintain their own system of government (under the wise and rational eye of older teen Alby, played by Aml Ameen), because there’s no way to escape.

At the edge of the Glade is a massive labyrinth, the internal walls of which shift around every day, making mapping of the maze next to impossible, despite the best efforts of the “runners,” the community’s strongest and fastest, who travel through the maze every day and make sure to be out before nightfall. This maze is also populated with “grievers,” hideous giant scorpion-like creatures that appear to be part organic and part robot.

In true Photogenic Messiah form, Thomas immediately goes about upsetting the apple cart; one of the runners, stung by a griever, attacks Thomas and babbles madly that all of this is Thomas’ fault. Thomas manages to be the first inhabitant of the Glade to kill a griever, which leads to a swift and terrifying reprisal. Then the elevator returns, bearing a girl for the first time: Teresa (Kaya Scodelario, “Skins”), clutching a note saying that she is the last shipment.

Who put these teens here, and for what purpose? It’s an intriguing premise, at first anyway, in Noah Oppenheim and Grant Pierce Myers’ adaptation of the novel by James Dashner. But the more we learn about Thomas and Teresa’s shared nightmarish memories, and the closer the movie gets to its requisite “to be continued” climax, the less interesting it all seems.

“The Maze Runner” has “Lord of the Flies” (stripped of all socio-political context) and even a bit of “The Cabin in the Woods” in its DNA, but the progression of the plot drags it toward being just another YA adaptation. (Is it even a spoiler to say that there’s an apocalypse involved?)

Kudos to casting director Denise Chamian for making the inhabitants of the Glade such a diverse and interesting group — we’re forced to meet a lot of characters at once, but the movie wisely casts young actors with interesting faces (Thomas Brodie-Sangster, Ki Hong Lee, Will Poulter, Blake Cooper) who register quickly and then hold our attention throughout the film.

For its first half or so, “The Maze Runner” tells a captivating tale of survival and weaves a potentially interesting mystery. Once its path become clear, however, you realize this is a puzzle you’ve worked out before.