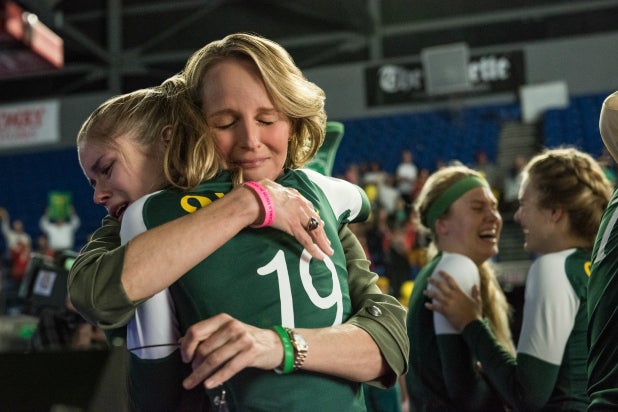 Evidenced by closing-credits photographs and footage of the real athletes and adults involved, “The Miracle Season” could have worked powerfully as a documentary. But as a faith-based re-enactment of Iowa high school students rallying for a second championship volleyball season after suffering an unimaginable personal loss, Sean McNamara’s film barely qualifies as a story at all — except where dramatic license was conspicuously taken to make sure it adhered to almost every cliché in the sports-movie playbook.

Danika Yarosh (“Jack Reacher: Never Go Back”) plays Caroline “Line” Found, an effervescent, beloved, boundlessly energetic senior at Iowa City West High School. As captain of the women’s volleyball team, she led them to victory as a junior, and considers back-to-back championships an inevitable fulfillment of their athletic destiny, especially after dedicating their season to her ailing mother, Ellyn (Jillian Fargey, “Bates Motel”).

But when Line dies in a scooter accident the night after their first game, her best friend, Kelly (Erin Moriarty, “Captain Fantastic”), and the rest of the team are devastated, and not even Kathy “Coach Bres” Bresnahan (Helen Hunt), their stern, no-nonsense coach, can rekindle their love for the game.

Coach Bres eventually tasks Kelly with the responsibility of rallying her teammates, despite Kelly’s reservations over whether she can fill Line’s shoes as team captain. But after scoring their first victory, the team decides to dedicate its season to her and to follow through with their tribute by overcoming those early losses to win another state championship on her behalf.

Movies like are typically so saccharine that audiences end up with a cavity by the final scene, but the only way in which “The Miracle Season” distinguishes itself is by being so clean-cut and wholesome that it makes a Noxzema commercial seem gritty by comparison. (It features possibly the only scene in movie history where a group of otherwise unsupervised teenagers are actively disappointed that the only attending parent, who was performing magic, no less, decides to turn in for the night.)

McNamara, who directed “Soul Surfer,” exerts a light touch on the spiritual themes — worry not, those of ye who are uncertain whether Line’s father, Ernie, played effortlessly by William Hurt, will reconcile with God after losing his daughter and his wife within two weeks of one another — but in this case, that’s a bad thing: There are no other themes to replace them, leaving only the wheezing machinery of a sports underdog story in which the team is comprised of title-winning athletes.

Portraying a real-life teenager, much less such a revered one as Found, was no doubt a challenge for Yarosh, but I’m not fully sure her “more is more” approach to the role turns the character’s charm offensive into actual charm. Moriarty, on the other hand, wrestles with more emotion than her co-star, but despite the appealing balance of reluctance and determination she brings to Kelly, she occasionally seems adrift in the formulaic adversity thrown into her path to make their journey seem not quite as predestined from the first frame.

Meanwhile, Hunt throws her all into the coach who learns how to feel again by coaching these grieving young women to victory, but Midwest mannerisms (like repeatedly calling Line, and later Kelly, “cap’n”) disrupt what never seems to settle into a consistent take on the character. Does Bres struggle with literally any emotion? Did Line’s death specifically affect her? Or is there an additional or other back story, hinted at in her opening scene, that we don’t know about?

And as Ernie, Hurt supplies unsurprising volumes of gravitas and vulnerability, but the work is all so simple and surface-level for a guy capable of such powerful depths that none of it resonates particularly deeply.

There’s also a love interest for Kelly, a hunky Anson Elgort type played by Burkely Duffield (“Warcraft”) who, in an almost refreshing reversal, has literally nothing to do except look good and blandly support his lady. But otherwise, the film isn’t interested in challenging conventional expectations, or much of anything else; last year’s nonfiction “Step,” by comparison, chronicled the adversity of a group of reigning champions with much more complexity, and consequently, emotional heft.

Ultimately, “The Miracle Season” mistakes an inspiring true story for one that needs or deserves to be told cinematically; it isn’t awful, but it’s not a film, it’s a tribute, and unfortunately, one to the memory of a young woman who would be better honored by people actually “living like Line” than watching a formulaic, fictionalized retelling of her community learning what that means.