A version of this story on Hugh Laurie also appears in the Down to the Wire issue of TheWrap’s Emmy magazine.

“The Night Manager” is a quietly gripping six-hour British miniseries that aired on AMC and landed a dozen Emmy nominations, including nods for Tom Hiddleston as the title character, Hugh Laurie as a suave arms dealer and Olivia Colman as the dogged British agent determined to bring him down.

But it didn’t have an easy path from the pages of John Le Carre‘s 1993 novel to the screen.

Le Carre’s novel, about a hotel manager drawn into a shadowy world of arms dealing and espionage, had long resisted the best efforts to put it on screen. Director Sydney Pollack had the rights for years and commissioned a script from the legendary Robert Towne — who, according to Laurie, “made a rather peculiar pronouncement that le Carré was unsolvable, which I think still slightly nettles the great man.”

It also confused Laurie, who had tried to secure the rights to the book before he’d even finished reading it when it came out.

“I just fell in love with it instantly,” he said. “I was about four chapters in and I tried to option it. To this day I don’t know what optioning means, but it’s a term I’d heard grown-ups use.”

Laurie also saw the film as a vehicle for himself — not as the baddie, but as the dashing young hero, Jonathan Pine, who is played by Hiddleston.

“I admit it, I saw myself as the young stud risking all for the love of a woman and for his country and all that stuff,” he said. “Because that’s what you do at that age.

“It’s probably better that it didn’t happen happen, because Tom Hiddleston is absolutely perfect. He fills the studly role to perfection.” 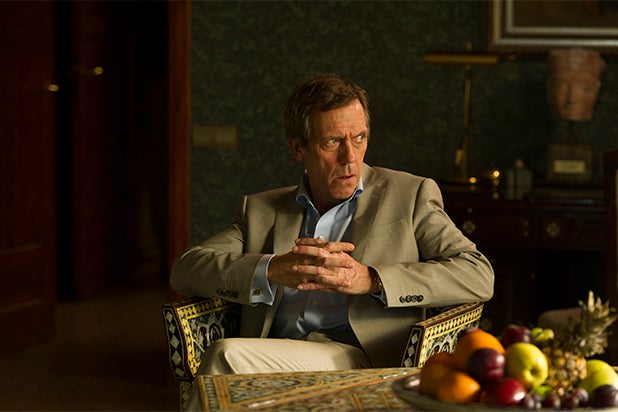 Besides, he said, his interest in the book went far beyond his desire to play the character. “What I’d fallen in love with, at least as much as the character of Pine, was the world of the story,” he said. “And although the story was written nearly 25 years ago, it is contemporary.”

Recently, he said, he read an article about a Polish arms dealer arrested for selling weapons in the Sudan, something Laurie’s character could well have been involved in. “My God, the goings-on were just absolutely eye-watering,” he said.

“He made an absolutely bizarre threat that I’d never heard before: He threatened to put his enemies in a glass jar. Isn’t that one of the creepiest things you’ve ever heard?”

Early in the Susanne Bier-directed miniseries, Colman’s character describes Laurie’s arms dealer as the worst man on Earth. “Obviously, what you have to strive to avoid is people saying, ‘Oh, he’s not that bad,’ thereby undermining Olivia’s premise,” said Laurie.

“But at the same time, it gives you freedom. Once that premise is established, you don’t necessarily have to show it at every moment. You don’t have to be torturing puppies in the very first scene. You can show the civilized veneer on top of this awful mayhem that he creates and profits from.”

And did he research any current arms dealers, like the guy who threatened to put his enemies in a jar?

“I had to do research at a distance, and was prohibited by the lawyers from actually approaching any of these people,” he said. “Once you do that, you are giving them license to sue, to say, ‘I am not the worst person in the world, I am the third-worst.’

As an executive producer on “The Night Manager” as well as one of its stars, Laurie added that he has some idea how the filmmakers solved the book that Robert Towne had declared unsolvable.

“My theory is that that it’s an English novelist and an English story, and that is how we live,” said Laurie, a six-time Emmy nominee for “House” who hails from Great Britain but now lives in Los Angeles. “The English live in six-hour chunks and Americans live in two-hour chunks.

“Americans anticipate the possibility of lives changing radically. You meet the girl, or you lose your job or you get the job, whatever it might be, and a life is turned upside down.

“The English are slower. We are not a frothing river, we are a glacier. And maybe long-form television suits us better.”