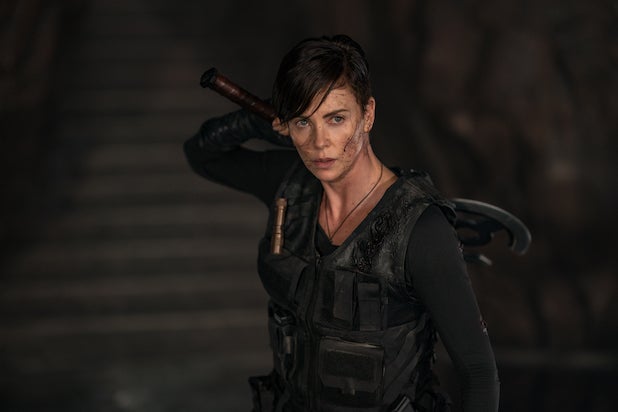 If you like your superhero comic-book movies with a truckload of angst on the side, “The Old Guard” might be just what you’re looking for. Or if you like your brooding dramas best when they come with a high body count, this could be the movie for a nice punchy weekend.

“The Old Guard,” which premieres on Netflix on July 10, is a formidable hybrid. It’s based on a comic book series by Greg Rucka and Leandro Fernandez about a group of immortal warriors who have been spent centuries quietly dueling the worst people they can find on the planet, but for much of its two-hour running time it focuses not on the battles but on their melancholic aftermaths. It gives Charlize Theron another chance to kick serious butt, which we know she does very, very well, but what you might take away from her performance isn’t her ace stunt work but her haunted weariness.

Director Gina Prince-Bythewood, best known for 2000’s “Love & Basketball” and 2014’s “Beyond the Lights,” becomes the latest director who doesn’t seem particularly suited to the world of comics, but who brings a new sensibility to the genre. And in Theron, Matthias Schoenaerts (“Rust and Bone,” “The Mustang”) and KiKi Layne (“If Beale Street Could Tall”), among others, she has a cast that is never content to just hit and run.

Theron, who is back to the sinewy power we saw in “Mad Max: Fury Road” and “Atomic Blonde,” plays Andromache of Scythia, but you can call her Andy. Two or three centuries ago (don’t ask her age!), she figured out that she could never be killed, that every injury would heal. Over the years, she found a few more people like her, and formed an unstoppable group of fighters who roamed the world doing what they hoped was good, though sometimes it was hard to know for sure.

Andy and fellow immortal Booker (Schoenaerts) are tipped off by ex-CIA operative Copley (Chiwetel Ejiofor) to a group of Sudanese terrorists who have seized a group of schoolgirls, so they embark on a rescue mission with Joe (Marway Kenzari) and Nicky (Luca Marinelli), who met while killing each other (many times) in the crusades and are now life partners.

But the rescue mission turns out to be a setup — and after a stark and dramatic underground battle in which Andy and her crew are machine-gunned full of holes, only to rise up and kill everybody in the room who’s capable of dying, they head out of town vowing to get even with Copley.

But things get complicated when Nile Freeman (Layne), a female U.S. Marine in Afghanistan, has her throat slit by a terrorist leader but recovers almost immediately. Andy’s immortals all have dream visions of Freeman, and vice versa, and after a few brutal fights, she’s more or less on their team. (When Booker asks Andy how the new girl is, the reply is succinct: “She stabbed me. I think she has potential.”)

Their goal may be to take down Copley — but it turns out that the real bad guys here aren’t the terrorists or the CIA, but Big Pharma in the person of Merrick, a young CEO who makes Martin Shkreli look like Mother Teresa. Merrick is played by Harry Melling (Dudley Dursley in the “Harry Potter” movies and the armless, legless orator in “The Ballad of Buster Scruggs”) with such oily glee that you know from the moment he comes on screen that things aren’t going to end well for him.

For much of its first hour, “The Old Guard” is an efficient action movie with a dramatic look (courtesy of cinematographers Tami Reiker and Barry Ackroyd) and fights that go on for too long but are pretty bracing anyway. But the key to where it’s going comes in the resignation in Andy’s voice, and in her words when she talks about the work of her team over the centuries. “We’ve done nothing,” she says. “The world isn’t getting better, it’s getting worse.”

Immortality, it turns out, is not a foolproof state of being: At some point, the wounds won’t heal and might actually kill you. And even if they don’t, everyone you know and love will die as you go on and on, unable to help them or to fix the world.

There is a deep well of sadness at the heart of “The Old Guard,” and it dominates the central portion of the movie. It’s there in Andy’s haunted, drawn gaze, in the soft way she acknowledges that she’s the oldest of them all, and in the horror stories that Booker tells to Freeman when Andy’s not around. “Just because we keep living doesn’t mean we stop hurting,” he says.

The melancholy definitely slows down the film, and at times it threatens to overwhelm it. But that’s not exactly a bad thing: Theron and Schoenaerts sell the ache in every word and every glance, and the idea of a doomy meditation on loss and pain wrapped in the trappings of a fantasy action flick is an interesting one indeed.

Yes, it goes on too long — and yes, the movie eventually gets back to shooting and stabbing and fighting, just as you knew it would. But the odd mixture of tones, which is underscored by the music from Hauschka and Dustin O’Halloran, gives “The Old Guard” more weight and resonance than you might expect. It’s an inclusive, female-centric comic-book action movie, sure — but to its credit, it’s also sad, which turns out to work pretty well in a movie like this.