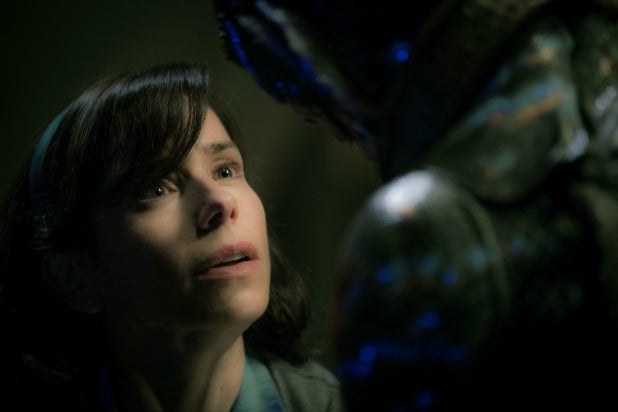 "The Shape of Water" / Fox Searchlight

The first three fall film festivals have come and gone, with hundreds of films and dozens of Oscars contenders unveiling for movie fans in Venice, Telluride and Toronto. And after all those screenings over 19 days from late August through mid September, who got the biggest Oscar-season boost?

Would you believe Christopher Nolan and Steven Spielberg?

Mind you, neither Nolan nor Spielberg debuted a film in Venice, Telluride or Toronto. Nolan’s “Dunkirk” opened in late July, and while he screened “Dunkirk” in Toronto as part of a tribute to the 50th anniversary of IMAX, the movie was a known quantity long before the festivals began.

As for Spielberg, he’s still working on his Pentagon Papers drama “The Post,” starring Meryl Streep as Washington Post publisher Kay Graham and Tom Hanks as editor Ben Bradlee. It wasn’t ready to screen at any of the festivals, and doesn’t open until December.

And yet both of those films got a boost from the festivals, because no slam-dunk Oscars frontrunners came out of the trio of fests – no major discoveries like “Moonlight” last year or “Spotlight” the year before, no instant awards favorite like “The King’s Speech” in 2010 or “12 Years a Slave” in 2013

That’s good news for “Dunkirk,” the top Best Picture contender to emerge from the first eight months of the year, and for “The Papers,” the likeliest of a yet-to-be-seen crop of films that also includes Ridley Scott’s “All the Money in the World,” Denis Villeneuve’s “Blade Runner 2049,” Michael Gracey’s “The Greatest Showman,” Paul Thomas Anderson’s untitled fashion drama with Daniel Day-Lewis and maybe Clint Eastwood’s “The 15:17 to Paris.”

Still, history suggests that half or more of the latecomers won’t be real awards contenders. So if the festivals didn’t provide an immediate leader in the clubhouse, they must have given us a few strong contenders, right? After all, the last time an Oscar Best Picture winner hasn’t played the fall festival circuit was “The Departed,” back in 2006.

(One semi-exception: The 2009 Best Picture winner, “The Hurt Locker,” played the festivals in 2008, the same as that year’s winner, “Slumdog Millionaire”; “Hurt Locker” wasn’t released until the following year, when it won over all the ’09 festival features.)

Another Fox Searchlight film, Irish playwright-director Martin McDonagh’s “Three Billboards Outside Ebbing, Missouri,” was the surprise audience winner at Toronto, an award that has gone to an Oscar Best Picture nominee five years in a row, and eight of the last nine years.

Paramount’s three big festival movies, on the other hand, emerged from the festivals in trickier positions. Darren Aronofsky’s “mother!” was the talk of the festivals and now it’s the talk of Hollywood, but it’s so bold and so divisive that its real awards chances seem slim (though you shouldn’t underestimate the value of the passion vote in the first round of best-pic balloting). Alexander Payne’s “Downsizing” did well in Venice but wasn’t embraced as eagerly in Telluride or Toronto; it has plenty of fans, but it’s on the bubble. And George Clooney’s “Suburbicon,” a Coen brothers-style black comedy (based on a Coens’ script) overlaid with a story of racial violence, was a non-starter at the festivals.

Three known quantities from earlier festivals – Luca Guadagnino’s “Call Me By Your Name,” Sean Baker’s “The Florida Project” and Dee Rees’ “Mudbound” – held their own and could rally voters over the course of the season.

And a number of other films at least laid the groundwork for their awards runs. Those include “Battle of the Sexes,” “Victoria & Abdul,” “Molly’s Game,” “Stronger,” “Breathe” and “Hostiles,” if Scott Cooper’s audacious western gets a distributor and a 2017 release.