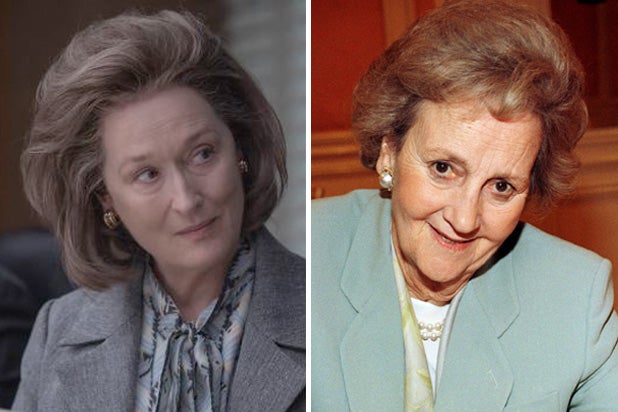 “The Post” is a wonderful movie. But it takes some liberties with the life story of Washington Post publisher Katharine Graham to play up her hero’s journey from uncertain widow to journalistic icon.

In the film, Graham (Meryl Streep) says that she never had a real job until she inherited her job as publisher of the Post when she was 45. This helps the film tell its powerful story of a woman learning to claim her authority, though wisdom and bravery, in a male-dominated world. Early in the film, we see Ben Bradlee (Tom Hanks) tell her in no uncertain terms to keep out of journalistic decisions.

The first page of Graham’s autobiography, “Personal History,” describes her mother, Agnes Ernst, on the day her parents’ paths first crossed in 1908:

Agnes Ernst, just twenty-one and a recent graduate of Barnard, was strikingly beautiful. She was earning her own living and helping to support her family as well by her free-lance work at a newspaper, the old New York Sun. … Both her interests and her work were unusual for a woman in those days.

Ernst was so “strikingly beautiful,” Graham writes, that Graham’s father, Eugene Meyer, resolved to marry her the moment her saw her for the first time.

Meyer didn’t buy the Post until 1933, after making millions in other industries. As “Personal History” makes clear, Graham’s mother was closely involved in the decision to buy the paper. Graham quoted from her mother’s diary:

…he [Eugene] has suddenly decided to buy [the Post]. If he succeeds it will be a sensation and we shall have a reputation for Machiavellian behavior. I was reluctant at first because it means more hard work at once but after all these are not times in which to loiter. Also it means a heavy expenditure but what after all is money for if not to be used…

As Graham’s book makes clear, her mother felt her professional and personal ambitions were stifled by the responsibilities of motherhood, and the social obligations of being married to a very wealthy man. She found some satisfaction by getting involved in Washington politics, and in her love of art, particularly from Asia.

Graham became a reporter after graduating from the University of Chicago in 1938, when her father helped her land a job at the San Francisco News. Despite her unencumbered path to the position, it wasn’t a cushy job.

“Covering the waterfront,” in journalistic circles, is a slang expression for catching every story on your beat and reporting it well. Graham literally covered the waterfront, reporting on a tense labor dispute on the San Francisco docks in an era when labor-owner relations were one of the hottest issues in American life.

The next year, Graham went to work at the Post, where she edited the letters to the editor. She also met Philip Graham, a law clerk for Supreme Court Justice Stanley Reed, and married him the next year. He went to work at the Post, and Eugene Meyer “sold 3,500 of the 5,000 Class A shares of voting stock to his son-in-law and 1,500 shares to his daughter,” according to the Post’s obit of Graham. The paper added:

The reason for giving Katharine only a minority interest in the voting stock, Meyer said, was that “you never want a man working for his wife.” Mrs. Graham recalled that “curiously I not only concurred but was in complete accord with the idea.”

But by the late ’50s, Philip Graham was struggling with a diagnosis of manic depression, and self-medicating with alcohol. In 1963, he killed himself at age 48. The Post wrote:

Within days after her husband’s death, Mrs. Graham told the board of directors that The Post Co. would stay in the family. On Sept. 20, 1963, after a month’s cruise in the Aegean with her mother and daughter and some friends, she assumed the presidency of the company.

Years passed between that decision and the events portrayed in The Post. Suffice it to say, by then, Katherine Graham knew her way around the news.