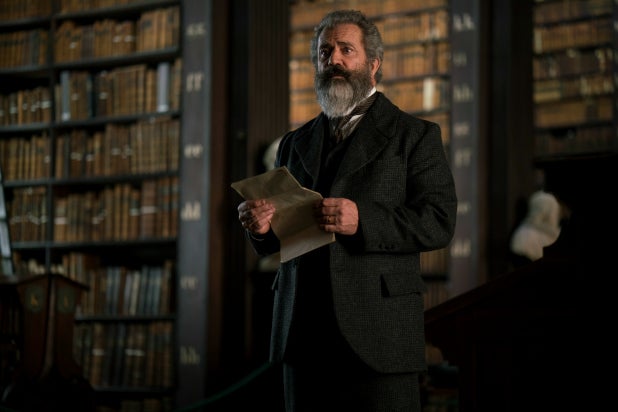 I don’t have a copy of the Oxford English Dictionary in front of me but the OxfordDictionaries.com website defines “boredom” as “the state of feeling bored.” Which is about as insightful as anything one can find in “The Professor and the Madman.”

The film, credited to “PB Shemran” — a pseudonym for Farhad Safinia, who co-wrote Mel Gibson’s “Apocalypto” — stars Gibson as James Murray, the man responsible for compiling and completing most of the OED before his death. The astoundingly thorough compendium of every word in the English language was a mammoth undertaking and required significant assistance from a wide variety of sources. One of those sources happened to be confined to a mental institution after committing murder.

Sean Penn co-stars as Dr. William Chester Minor, a Civil War solider and doctor with paranoid delusions that led him to chase a stranger through the streets and gun him down. Repentant, he now sits in a rather lavish cell, given the era, with quite a few creature comforts, including a respectable library of books. He uses that collection of literature to assist Murray in his ongoing efforts not only to catalogue every word but also to track their evolution from their creation to the modern day.

Also Read: Mel Gibson Sues Voltage Pictures for Breach of Contract, Fraud Over 'The Professor and the Madman'

It’s an intriguing footnote in history, this pair of unlikely allies engaged in this nearly-impossible task which spawned a historically invaluable volume. The book on which the film is based, written by Simon Winchester, was a best-seller, but you’d never know why from watching this turgid adaptation, which gives you the gist of these events with all the insight and heft of a B-minus high-school book report.

Gibson and Penn aren’t on a collision course in this movie: They’re in two separate, inert films that happen to nudge up against each other every so often. Murray’s story is that of a spectacularly-bearded Scottish gentleman who gets the dictionary gig, figures out a pretty clever way to get the job done efficiently, finds out one of his best pen pals is a mentally ill murderer, and then handles it very well and goes about his business.

Minor’s story is that of a spectacularly-bearded schizophrenic who kills a man, but isn’t all that bad really, so he donates his entire army pension to man’s widow, Eliza (Natalie Dormer). Eventually he teaches her to read, and she falls in love with him a bit, which sends his guilt-ridden mind into bouts of egregious self-harm.

By the time Murray and Minor are embroiled in a serious conflict, over the authorship of the dictionary and the need to free Minor from his torturous captivity, the movie has long since felt over and done with. There simply isn’t enough material here to justify an entire feature film, so instead we just watch as the same dramatic beats repeat over and over again.

Gibson has almost nothing to do for half the film. He just sits there, peering over his mighty chin scruff and waiting to say something terribly clever, much to the surprise of everyone in the room. By the time he gets his big speeches about forgiving people for their violent outbursts, he’s developed so little character that all we can see is Gibson himself, hiding his face, trying not to give away how on-the-nose this dialogue is.

Meanwhile, Penn grumbles his way through his own voluminous facial follicles, screaming and muttering until someone (presumably) finally said “Cut!” and set him free from this muddled, unfocused screenplay (credited to “Shemran” and Todd Komarnicki). The supporting cast is a veritable who’s-who of British character actors, most of whom do little more than play stock archetypes.

I’ll say this much about “The Professor and the Madman” — it’s a movie about writing the whole dictionary, and after watching it, I felt like I just watched someone write the whole dictionary. What a superficial and tedious motion picture, never quite bad enough to be campy, never remotely good enough to justify watching it instead of reading the book’s Wikipedia page. It is a film of giant beards; it is a film of giant boreds. And if “boreds” isn’t a word, you can go ahead and add it to the Oxford English Dictionary right now, with the poster of “The Professor and the Madman” right beside it for reference.