Alejandro G. Iñárritu’s “The Revenant” was not, it’s safe to say, an easy shoot. Temperatures in the film’s remote locations in the Canadian Rockies reached 40 below zero, until suddenly the snow unexpectedly melted and the entire production had to move to South America to shoot the final scenes.

The budget soared, the director was demanding and the cast, including Leonardo DiCaprio and Tom Hardy, could only shoot for an hour or so a day because Iñárritu and cinematographer Emmanuel “Chivo” Lubezki were so enamored by the beauty of natural light that they waited for that so-called magic hour.

But somehow, “The Revenant” came together. Loosely based on the true story of 19th century wilderness guide Hugh Glass, who was left for dead by his companions after being mauled by a bear, the film is bold, bloody and beautiful; in TheWrap, Robert Aberle called it “a masterpiece of all-in filmmaking.”

Iñárritu, the reigning Oscar Best Picture and Best Director champ for “Birdman,” spoke to TheWrap after “The Revenant’s” Los Angeles premiere about the grueling shoot, his influences and his aversion to doing things the easy way. (Warning: Near the end, the conversation deals, in a rather abstract way, with what might be considered a spoiler.)

What drew you to “The Revenant?”
I think the real event was very brutal, very primitive, very biblical in a sense — the survival of somebody about to die, somebody who was coming from death, almost. And the opportunity to explore it in this open space of nature, in this time 200 years ago that doesn’t exist anymore — to explore that cinematically and personally was a great opportunity that I had never done in my life.

Most of your films are set in urban environments.
I have never had one tree in any of my films, never. I hate trees in my films. You will never see green. I had nightmares about how to shoot the forest. This was absolutely uncharted territory for me, and that’s what really excited me.

Did you ever consider filming in less remote locations, or using CG for some of the environment?
I will ask you a question. What do you prefer: to bite and taste real corn, or to bite GMO corn? What I am saying is, we are now so used to the GMO food that we can’t remember when the real flavors of food were available to us. We have been pixel-izing our world in cinema so much that people are shocked that I would even attempt to risk going to the real locations. But that was our duty and that was our pleasure and that’s what an artist is supposed to do.

And when people ask me if what I shot was real — yes, real life, with light from the sun. There can’t be more beautiful light than the sun gives. So why would I put a shitty film light on my actors that they will look artificial?

But did you wonder if it’s fair to put your crew and your actors through these situations?
Anybody that signed up for this film knew where we were going. Some of them feel uncomfortable about it. We were extremely high, and shooting too long, and not in the comfortable zone that they were used to — so yeah, it was very demanding, very rigorous, and not for everybody.

Compared to “Birdman,” that was a completely controlled environment. Some films, you know that you own them. They can be good or bad and they can have conflicts, but they go into a box of some predictable kind of results. This was a fucking animal on another planet — a big canvas with no frame. It could go anywhere. And that is scary.

It’s scary because now ambition is punished. You attempt to do something out of the box, you are risking the whole fucking agreement that we all have that everything should be predictable and comfortable. 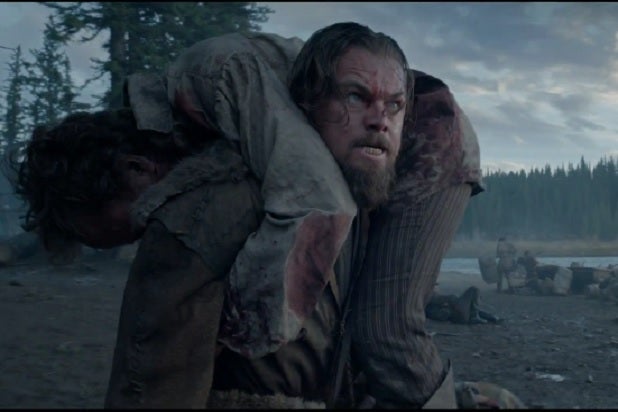 You said “Birdman” was contained, and yet you choreographed it to look like one take. It strikes me that you’re most comfortable as a filmmaker when you’re setting yourself challenges that complicate the task in front of you.
It’s exciting to attempt something that can fail terribly, don’t you think? If you can explore something technically or emotionally that takes you out of your comfortable zone, it can be more powerful. I find myself a little bit bored when I do things that are a little bit too easy or too predictable or too obvious. Maybe is a weakness, but that’s exactly who I am.

Also Read: Wrap Screening Series with 'Birdman's' Michael Keaton: 'We Knew We Were Onto Something Risky' (Video)

If “Birdman” was a jazz song, “The Revenant” is a huge dark opera or something, massive and immersive and implacable.
I always thought about Caravaggio. Sometimes when I go to the Metropolitan [Museum of Art], I think, “Why is the impact so much?” It’s because of the light, and because those landscapes and everything seem like a dream. This film has to do with dreams and paintings and memories and ghosts.

Maybe because of its dreamy quality, the film has been compared to Terrence Malick. Is that a fair comparison? Did you think of him at all?
Not really. I love Terrence Malick‘s films, especially the first ones, and I’m honored to be mentioned with Malick. Obviously it has been compared for the obvious reason that Chivo and him have worked on so many films, and obviously Terrence likes to shoot at the right time of the day. But I think the narrative and the storytelling of Terrence, lately especially, with the voiceover and the fragmented time and space that he creates, is far from what I’m trying to do here with the narrative and dramatic tension.

What I had in mind was “Andrei Rublev” by Tarkovsky. “Dersu Uzala” by Kurosawa. “Aguirre, Wrath of God” and “Fitzcarraldo” by Herzog. “Apocalypse Now.” Films that deal with men against nature and men against men in vast, spectacular landscapes, with action, but also a very spiritual dimension.

Speaking of action, you’ve said you didn’t want to make this a revenge story. But the film builds toward a confrontation between DiCaprio’s and Hardy’s characters.
Western films can have kind of a wink to the audience — like, once a guy gets revenge he will live happy ever after. I doubt that. I understand revenge, I have done revenge, we all that that unwholesome feeling. But in my personal experience I know that it’s never satisfying. It leaves you empty. My question in this film is, “Is revenge hollow, or does it really give you what you are looking for?”

There are no easy answers, but in the time that we are living now, when so much revenge is in the air, this might be a good moment to see if there’s a possible transformation of the idea of revenge. Maybe to find a solution in long term, instead of being tempted to just react.

Like, the fight at the end; I wanted it to be a fight between animals. These men in that time, they eat four or five pounds of animal meat every day, they wear animal pelts, and they become the status of animals. I wanted it to be almost like the bear attack scene — these two guys are savages, creatures, and the fight was that. And then the spirit comes to mind and [DiCaprio’s character] says, “What the fuck, who I am?” I thought that was a good exploration to have in this film.

I think you’re probably a little nuts for trying to make “The Revenant,” but it’s quite an accomplishment.
Yeah, I’m very proud of it. There’s absolutely nothing that I kept in my pockets — that’s all that I’ve got to give. It almost killed me, too.

I think it’s a very ambitious film. It was always conceived with high standards, and it was maybe a very crazy, irresponsible idea to have made. And I never expected it to be as challenging as it was in reality. But having survived it, maybe having died and been reborn many times during the shooting, I feel extraordinarily proud.