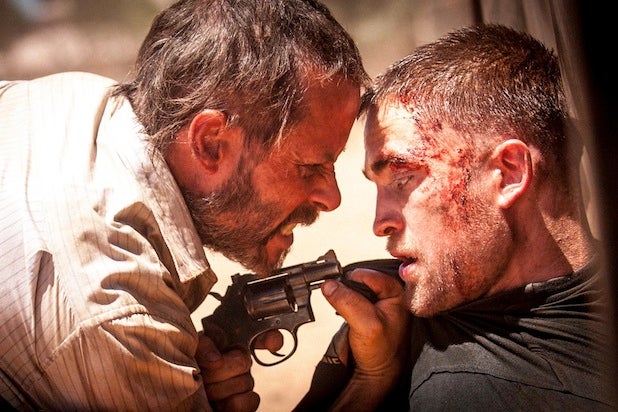 Unlikely to win an endorsement from the Australian Tourism Board, “The Rover” presents an unrelentingly bleak view of the land Down Under in the near future.

There’s nary a koala in sight and no jocular offers to throw another shrimp on the barbie in writer-director David Michôd’s downbeat road movie, set in the hot and dusty Outback 10 years after an undefined collapse. A general air of lawlessness prevails, with armed soldiers patrolling streets populated with flophouses and surly shopkeepers.

The movie’s two attractive leads — Guy Pearce and “Twilight” idol Robert Pattinson — spend the movie caked in grime and sweat, batting bugs out of their eyes.

See video: Guy Pearce Drags Around a Busted Up Robert Pattinson in ‘The Rover’ Trailer

“The Rover’s” dystopia isn’t rooted in repressive control like “Divergent” or “The Hunger Games,” but rather in overriding despair and a breakdown of order. Consequently it’s both more realistic and more dispiriting than the heavily art-directed YA allegories proliferating at the box office lately.

“The Rover” begins when a bearded Eric (Pearce) stops for a drink long enough for criminals on the lam to steal his car. Unwilling to let it go for reasons that don’t become fully clear until the movie’s conclusion, Eric takes after the thieves with a vengeance, at first trying to run them off the road like a maniac.

The character, seeming a victim at first, grows increasingly murky as the movie progresses, as capable of casual violence as the next guy. He forges an unlikely alliance with Rey (Pattinson), the “half-wit” brother of Henry (Scoot McNairy), whom the thieves have left for dead.

In Pearce’s oblique performance, it’s never quite clear how much Eric cares for Rey, but he does look after him in his own way. An even grimier Rey returns the favor when Eric gets in a jam.

The movie culminates in a dramatic showdown and funeral pyre. Even those that survive don’t seem overly happy about it. Such is the despair over the meaning of life in “The Rover.”

“You shouldn’t stop thinking about life you’ve taken,” Eric advises Rey at one point. “That’s the price you pay for taking it.”

Pattinson does a commendable job moving beyond his sparkly-vampire period, especially in a heart-wrenching scene with McNairy, but the movie really belongs to Pearce. He conveys his character’s deep despair over society’s anomie, crying out that a lost life should mean something, while at other times his eyes tell you everything you need to know about the character and what he’s seen.

Michôd (who shares story credit with actor Joel Edgerton, star of the director’s global hit “Animal Kingdom”) offers stylish direction, ratcheting up discordant music throughout. The cast is poly-ethnic and filled with immigrants, including Pattinson’s Rey; Australians have no corner on lawlessness in this movie. Dogs have to be locked up or else someone will eat them, and shop owners won’t help a troubled visitor unless he first buys a tin of something.

“The Rover” is less an allegory than a suggestion how bad things could become. It’s well made, and it’s disturbing, if not overly passion inducing. And it probably won’t make you rush out and book a holiday in Oz.