It isn’t easy being Walter Mitty in the year 2013. In our superhero world, Ben Stiller must have realized how much harder it is today for milquetoast men in a macho America when he set out to direct and star in “The Secret Life of Walter Mitty,” which is set for a December release, but which premiered on Saturday at the New York Film Festival.

Unfortunately, this “Mitty” tries too hard, and as a result his many adventures — both real and imagined — are neither intriguing nor amusing.

Back in 1939, when James Thurber wrote the original short story for “The New Yorker,” Mitty was just your ordinary henpecked husband who daydreamed extravagant fantasies of bravery and genius at the drop of his wife’s verbal jabs. Mitty traded in the wife for an annoying mother in the 1947 film version starring Danny Kaye — who naturally had to sing in his fantasies. But that wasn’t enough to float a whole movie, so they gave him a real-life adventure in which Mitty inadvertently found himself at the center of a ring of smugglers.

As impersonated by Stiller, Mitty still daydreams — but now a movie about him must ask the question, “Why?”

It’s pretty complicated, according to Steve Conrad’s screenplay. It seems that little Walter used to be an expert skateboarder whose father was so wise and loving that he let his son have a mohawk haircut. But when Walter was only 17, Dad died and son had to get a much more conservative haircut to land a job at Papa John’s Pizza. (This is the one reverie that is not played for laughs.) And, well, the rest of his life is pretty boring — except for the daydreams,which have him saving pet dogs from exploding buildings and telling the new boss that his beard is wrong for his face. 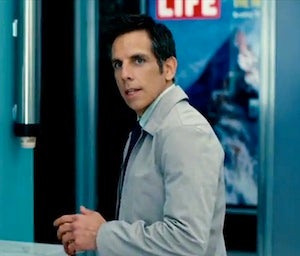 Stiller’s Mitty doesn’t sing, but he does know how to book a lot of airplane flights that take him around the world in search of a missing negative from Life magazine’s top photographer.

That’s the other really difficult thing about being Walter Mitty nowadays. He’s working for a magazine that has been moribund for years — except for those lovely commemorative issues they do on Katharine Hepburn and other dead celebrities. In Stiller’s movie, it took until 2013 for Life to put out its last print issue, and that missing negative would make such a great last cover. (As someone who worked as an editor at the real Life magazine, I can assure Stiller that its offices were never so interesting, dynamic and alive as rendered in this movie.)

So Mitty flies to Greenland, Iceland and Afghanistan to find the photographer (Sean Penn in a cameo) and that missing negative. Mitty no longer daydreams; he actually jumps from a helicopter into the ocean off Greenland, staves off a shark attack there, escapes from an exploding volcano in Iceland and climbs the Himalayas to find Penn. (Stuart Dryburgh’s stunning cinematography makes for a great travelogue.)

And to think that during the opening credits, Stiller’s Mitty had trouble clicking the “wink” button one eHarmony to contact his girlfriend-to-be, played by Kristen Wiig, who also doesn’t have a clue that Life is about to fold.

That’s probably the one easy thing about being Mitty today: He doesn’t have to ask his love interest to do much of anything, unlike Virginia Mayo, who in the 1948 film got to co-star in all the daydreams, as well as fight the smugglers.

Stiller has always shown a real affection for the softer side of manhood, whether those characters be male models, museum guards or nurses. What has made those portrayals so much fun is that bubbling just beneath the mild exterior is all that latent anger, rage and snark.