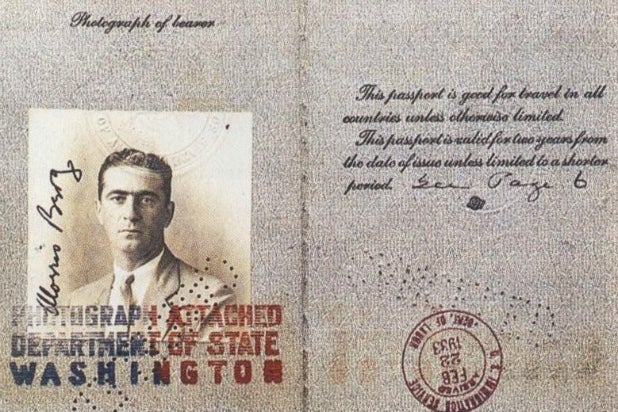 There aren’t a lot of sports stars who could claim to be as interesting as Moe Berg, a Major League baseball player who spoke nearly a dozen languages, blew audiences away on quiz shows, and worked as a spy for the United States government during World War II. Berg nearly assassinated German theoretical physicist Werner Heisenberg. Take that, Dwayne Johnson.

Berg, who got his own biopic last year (“The Catcher Was a Spy,” starring Paul Rudd) is now the subject of a major documentary. “The Spy Behind Home Plate.” Written and directed by Aviva Kempner (“The Life and Times of Hank Greenberg”), the film assembles pundits, contemporaries and family members, combining new and archived interview footage to reveal the many incredible facets of Berg’s life.

Nimble and efficient, “The Spy Behind Home Plate” races through that life at a steady clip, unloading one fascinating biographical tidbit after another. The action may be staid — it’s a talking-heads documentary, with vintage footage sprinkled in for flavor — but the information is rigorous. By the time the audience has absorbed one neat fact about Berg’s story, the documentary has moved on to yet another, and then another. When it’s finally over, you’ll probably feel like you could write a semi-respectable biography of Berg yourself.

Kempner’s film opens with Berg’s father emigrating to the United States, then moving to the U.K. because America wasn’t all it was cracked up to be, and then having to move back to the U.S. after all. He married and raised three children and expected them all to be well-educated sophisticates, and it apparently ticked him off to no end that Berg became a baseball player. Berg’s father never attended his games and, according to at least one interview subject, would spit whenever the topic arose.

Despite being an athlete, Berg was nevertheless educated, mastering many languages and eventually going to law school, even while he still played professional baseball. He’d call his games in Latin and, when asked what he would do if the other team knew Latin, reportedly joked that he’d “switch to Sanskrit.” He’d appear on radio game shows and travel abroad for publicity purposes, and he went so far out of his way to film Tokyo in 1934 — from such a height that it would eventually be useful to the Allies in World War II — that some speculated he may already have been working as an espionage agent.

But Berg’s career as a professional spy began in earnest with World War II, where he (along with other pop-culture notables like Marlene Dietrich and Julia Child) was enlisted by the Office of Strategic Services. His celebrity, his intelligence, and his skill with languages made him a valuable agent who had several notable European assignments, including the aforementioned, potential assassination of Heisenberg.

That’s the gist of it, but the appeal of “The Spy Behind Home Plate” isn’t the broad swath of his story. That got told in the film “The Catcher Was a Spy,” and it wasn’t quite cinematic enough to make an impression, even with Ant-Man in the lead. The superlative quality of Kempner’s documentary is the sense of familiarity it fosters as we come to understand Berg. We hear precious little from the player himself, with Kempner instead relying on first-and-secondhand accounts, but the sense of respect and camaraderie from the interview subjects is palpable.

To hear the talking heads of “The Spy Behind Home Plate” share anecdotes about Berg — like his odd predilections towards newspapers (which were “alive” if he hasn’t read them, and “dead” if he had or, worse, if anybody else had touched them), or his failed attempt to woo Babe Ruth’s daughter — is to stand in a room full of experts sharing their collected, dense base of knowledge. It’s infectious information, and whether or not you like baseball or World War II or whether or not you’ve ever heard of Berg before, you’ll probably find yourself a little rapt to hear the next revelation.

There are blind spots, unfortunately. Berg’s marriage gets a cursory mention early on and then his wife, Estella, never seems to come up in conversation again. And filmgoers who saw “The Catcher Was a Spy” may be surprised to discover that, no matter how confidently Ben Lewin’s film asserted that Berg was a closeted gay or bisexual man, the topic is never once broached in Kempner’s documentary, not even to dispute it.

“The Spy Behind Home Plate” instead stays focused on Berg’s many provable novelties, as an athlete, as an intellectual, and as an espionage agent. That’s quite enough to make Kempner’s film interesting, and the collegial atmosphere is inviting and warm. The film doesn’t take an extra step towards cinematic showiness, nor does it glamorize or sensationalize Berg’s life. It’s just a nice time talking about World War II and baseball, sharing stories and retelling old jokes. It’s a respectable ode to Berg’s unusual, remarkable life.