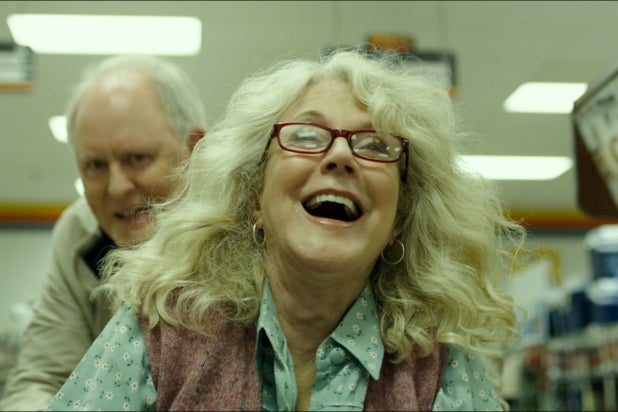 “The Tomorrow Man” sounds like a 1970s sci-fi film about a guy who predicts the future, but Noble Jones’ feature debut is kind of exactly the opposite, the story a guy whose fixation on the future keeps him from fully experiencing the present.

It’s a mostly thoughtful character study that falters only by failing to scrutinize fully the central character’s toxic, paranoid worldview. Nevertheless, the film makes some astute observations about the coping mechanisms we use to protect ourselves from the world, with Jones eliciting solid performances from John Lithgow and Blythe Danner as two troubled senior citizens embarking on a tenuous courtship.

Lithgow plays Ed, a lonely forced retiree who fills his days preparing for a sociopolitical apocalypse both physically (filling a hidden panic room with canned goods and gasoline) and philosophically, presiding over dark-web chatrooms with ominous declarations. Desperate for real-world interaction after exhausting even his son Brian (Derek Cecil, “House of Cards”) with endless, hectoring conspiracies, Ed crosses paths at the grocery store with Ronnie (Danner), a quirky, withdrawn clerk at a local collectibles store who lost her daughter to an incurable disease. After staging an innocent meet-cute between them in a parking lot, Ed asks Ronnie out, and after getting to know one another, they soon find common ground in the achievements and losses of their professional and personal lives.

Watch Video: Why John Lithgow Put His Full Trust Behind a First-Time Feature Director on 'The Tomorrow Man'

Though a romance quietly emerges during their time together, Ed and Ronnie run into roadblocks as a couple thanks to Ed’s interior world of fears and anxieties, not to mention the secrets Ronnie keeps hidden behind her front door. But after a health scare lands Ed in the hospital, he and Ronnie both are forced to consider how much their lives are keeping them from experiencing the joys of the present.

I’m not sure whether there’s an untapped niche of viewers who will identify with Ed or just an uphill battle for mainstream ones, but Jones’ film — which he also wrote and beautifully shot — dances sometimes too gingerly around the more questionable elements of the sexagenarian’s point of view. Mind you, he’s never openly racist or hateful, but Ed’s clearly unsure what to do with the influx of people of color into his small community, even when they’re wearing suits and friendly smiles. Thankfully, his early encounters with Ronnie arrive at a place where he begins to realize that their conversations are mostly one-sided, but Jones chronicles Ed’s self-righteous suspicions about the world with both honesty and sensitivity.

More specifically, Jones seems interested in examining how individuals deal with change, especially when the world seems eager to change whether or not they’re ready for it. Ed’s a former ball-bearing manufacturer rendered obsolete at a company to which he gave decades of his life; Ronnie was a wife and mother who lost her husband and child. He fears the uncertainty of the future; she clings to the comfort of the past. These anxieties manifest themselves in unhealthy, even harmful, ways both to their relationships with others and themselves. But the movie’s glimmer of hope comes in depicting two characters, particularly of advancing age, who initially resist but eventually are capable of looking at their lives honestly to make the incremental changes needed to escape those protective, isolating routines.

Lithgow continues to evidence his career-long versatility and fearlessness as Ed, a familiar type who never becomes a caricature, thanks to the actor’s commitment to making him simultaneously obnoxious and sympathetic. There’s something deeply recognizable, if contemptibly so, about how empowered he feels as an authority figure to the internet strangers waiting for his chatroom pearls of wisdom, a person with real-life experience trying to impart knowledge that he doesn’t quite realize is a placeholder for real fulfillment. But the sincerity of Lithgow’s performance — insistent, impatient, but always in earnest — keeps Ed just shy of becoming exasperating, allowing him to retain his likability as he woos Ronnie.

Danner’s intriguing, lived-in reclusiveness provides an effective dramatic fulcrum for Ed’s self-discoveries, not to mention a good comedic counterbalance to his kooky rants, but the actress’ febrile intelligence and natural compassion elevates what, like Ed, could have been a one-dimensional counterpart. She volunteers just the right amount of “not enough” in comparison to Lithgow’s calculated “too much,” and together they make for an eccentric and adorable, if troubled, pair. He provides her with sorely (and mutually-) needed companionship, and she extends a patience, if not always an understanding, that helps him see the walls he’s erected around himself.

In the process of proving himself as a screenwriter, Jones demonstrates that he’s already an able director of actors and an extremely skilled cinematographer, finding beautiful little shared moments between the actors and understated ways to communicate visually what’s going on emotionally. But even if he doesn’t give dark-web conspiracy theorists the thorough and proper thrashing that they probably deserve, he nonetheless dismantles their worldview by showcasing how that obnoxious certainty is almost invariably a byproduct of and protective armor against a deeper pain.

Quirky, tender and hopeful, “The Tomorrow Man” doesn’t necessarily depict a romance or relationship that everyone will immediately relate to, but Jones’ kindness and generosity as a storyteller encourages his audience to treat these characters empathetically, while providing a satisfying option for an especially tough-to-please demographic — adult children looking for something to watch with their parents.