Adaptations of Shakespeare plays have been released on the big screen for decades, but Joel Coen is planning on showing the world a Bard film they’ve never seen before with “The Tragedy of Macbeth,” which got its first teaser from Apple and A24 on Tuesday.

The adaptation of Shakespeare’s tragic tale of the power-mad King of Scotland stars none other than Denzel Washington as Macbeth, with four-time Oscar winner and “Nomadland” star Frances McDormand as the devious Lady Macbeth and “In the Heights” star Corey Hawkins as Macduff. It is also the first film of Joel Coen’s long, storied career that he is directing without his brother, Ethan, who is taking a break from filmmaking. 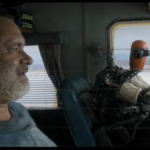 Also Read:
‘Finch’ Trailer: Tom Hanks Can Even Make the End of the World Heartwarming (Video)

The teaser shows a film that might remind some A24 devotees of another one of their films: David Lowery’s “The Green Knight.” Like that film “The Tragedy of Macbeth promises a dreamlike journey with haunting imagery. Unlike it, the Coen has shot the film in stark black-and-white and in a 4:3 ratio.

And as we see shots of Macbeth confronting the mysterious witches that foretell his rise and fall from power, we hear one of the play’s most famous lines: “By the pricking of my thumbs…something wicked this way comes.”

“The Tragedy of Macbeth” will be released in theaters on Christmas Day and on Apple TV+ on January 14. Watch the teaser in the clip above.