The hosts of “The View” were torn on Tuesday morning, after President Joe Biden was captured on video leaving a restaurant without putting his mask back on this week. For Sunny Hostin, it was another moment where the optics mattered, but for Joy Behar, the criticisms were unnecessary — particularly considering where they were coming from.

In the White House’s defense of the footage, press secretary Jen Psaki noted that “There are moments when we all don’t put masks back on as quickly as we should,” but reminded reporters in attendance that the administration remains committed to keeping people safe, and argued that no one should “overly focus on moments in time that don’t reflect overarching policy.”

For Behar, the criticisms from Fox News were particularly confusing.

“I love this right-wing B.S. that goes on on Fox News. All they do is tell you don’t wear a mask, don’t get vaccinated,” Behar said. “And now they see, oh my goodness, Joe Biden — he’s triple-vaxxed already. He was just eating. He’s gonna put it on in two seconds and all of a sudden the mask police come out of the woodwork at Fox.”

That said, multiple Fox News hosts were in a PSA encouraging viewers to get the COVID vaccine earlier this year, and host Steve Doocy has encouraged his viewers to also get the jab. The network also launched a vaccine-finder for viewers and it became company policy in August for Fox staffers to either upload proof that they have been vaccinated or get tested for COVID. Masks are also encouraged in small spaces in the building.

Behar and Sunny Hostin specifically took issue with Tucker Carlson’s recent criticisms of the vaccine, claiming that the public has been lied to regarding their efficacy, especially in light of Colin Powell’s death. But for Hostin, the “hypocrisy” Behar was referring to has simply been convenient. 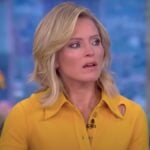 “Why give them the opportunity to be hypocrites though?” Hostin posed. “I think optics do matter. We are having a problem with messaging in this country. And we’re giving them these opportunities over and over and over again.”

Hostin then criticized Chicago mayor Lori Lightfoot, for also being out without a mask recently, photographed at a Chicago Sky basketball game.

“You’ve got all these people wearing a mask around her except for the mayor,” Hostin added. “And she is, at this very moment, in this standoff with I believe, as she’s the mayor of Chicago, with the Chicago police over a vaccine mandate. So she’s asking everybody to get vaccinated, but here she is sort of flouting her own city’s guidelines.”