This week on “The View,” things kicked off with a heated debate about the COVID-19 vaccine, as new research has come out indicating that the U.S. may not ever reach herd immunity.

Host Whoopi Goldberg led the discussion, questioning why the vaccine and wearing masks was still being politicized. When the topic came to Sunny Hostin for input, the host made a big declaration, arguing that those who don’t get the vaccine should be “shunned.”

Citing new data from PEW Research and other studies, Hostin listed of the groups of people who have indicated they won’t be getting a COVID vaccine.

“White evangelicals, 45 percent say they won’t get vaccinated, according to a PEW Research. Republicans, almost 50 percent of Republicans are refusing to get the vaccine,” Hostin noted. “So we won’t reach herd immunity because of those particular groups. So I say we need to shun those that refuse to get vaccinated.” 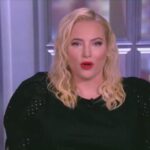 Following Hostin’s bold statement, Whoopi Goldberg then turned to Meghan McCain, asking if the threat of being turned away from businesses and public events would convince her to try and convince other people to go and get the shot.

“No,” McCain answered simply. She then went to on to criticize how different groups of people have been encouraged to get the vaccine, arguing that for minorities, it was more of a “we’re in this together” mindset but for Republicans and evangelicals, it’s been much harsher.

“The messaging toward evangelicals and Republicans is ‘You dumb hillbillies, stay the hell away from me.’ And I don’t think there’s any way that’s gonna convince anyone of anything if that’s the messaging coming out of the White House,” McCain said. 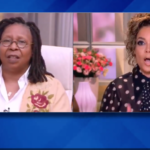 McCain noted that though she agrees the vaccines are necessary, and is in fact vaccinated herself, other Republicans are feeling alienated. “I have no problems with vaccines, but the messaging is psychotic,” McCain said. Moments later though, she questioned the efficacy of the vaccine paired with the latest CDC recommendations.

“A lot of this feels like it’s more about control than science. If the vaccine is 94 percent effective, which we are told by science and the CDC and all smart people who come on this show it is — if the vaccine works, why do we still have to wear masks outdoors? Why do we have to wear masks inside? And that’s also part of the messaging problem,” McCain argued.

McCain went to say that she’s come up with an ad campaign, specifically designed to encourage Republicans to get the COVID vaccine, but that the idea has fallen on “completely deaf ears” and hasn’t been advanced.