As Republicans continue to criticize Joe Biden for the speed and scope of his aid to Ukraine amid Russia’s invasion, “The View” host and moderator Whoopi Goldberg offered some blunt thoughts for them on Thursday morning.

“I’m sorry, where were all these Republicans when the former guy in office was holding money hostage, saying ‘We’re not going to give you the money until you give me the information about Hunter Biden?'” she said. “I mean, I don’t remember them being concerned at all that there was an issue, particularly when the president of the Ukraine said, ‘Listen, we need this, we need to be able to defend ourselves,’ and he dangled! Where the hell were y’all? I don’t remember you giving a good, blessed –.”

Goldberg had to cut herself off out in frustration, in an apparent effort not to cuss. You can watch the full segment from “The View” in the video above. 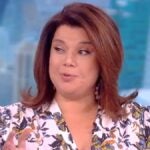 In response, guest host Alyssa Farah Griffin lightly attempted to defend the Trump administration, saying that she and her colleagues were actually working hard to make sure Ukraine got the money they needed.

“Well Whoopi, let me tell you where I was,” Griffin said. “I was at the United States Department of Defense. We were working around the clock to get this aid released to Ukraine to get security systems.”

When Whoopi then pressed further on why the money got held up, Griffin deflected, saying that question was answered during Trump’s first impeachment.

For Ana Navarro, the frustrations with Trump’s actions involving Ukraine went far beyond his withholding of funds. 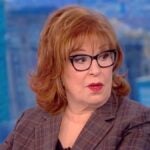 “He spread propaganda saying that Ukraine had been involved in the 2016 elections,” Navarro began listing. “He ousted the very well-regarded U.S. Ambassador to Ukraine because of who she was and what she did. He froze military assistance to Ukraine. He withheld a White House meeting for Zelenskyy, based on Zelenskyy not playing ball with him. And he turned over Ukraine policy to Rudy Giuliani!”

Once again, Griffin attempted to step in, arguing that Trump is no longer president, so he can’t be blamed for what’s happening now, prompting irritation from Goldberg and Navarro. Eventually, Whoopi circled back to her original point.

“What I’m taking offense at is that the fact that these people are suddenly all concerned now about what’s happened,” she said.