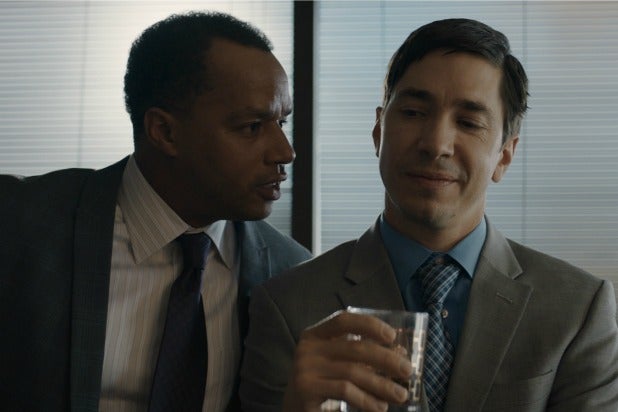 Let’s give Justin Long some overdue credit: few everyman actors actively choose to push the edges of their beta-dude personas. There’s always a need for ordinary guys in rom-coms and sitcoms, and Long could easily coast through them.

As often as not, though, he embraces eccentric efforts that remain under the radar, and surely don’t include a mainstream paycheck. Sometimes these risks are so bananas they become unforgettable, like 2014’s “Tusk,” in which Kevin Smith turned Long into a walrus. And sometimes, inevitably, they’re “The Wave.”

Even here, generous viewers might appreciate Long’s commitment to the unusual and unexpected. Through no fault of his, however, they will find both their loyalty and their patience considerably tested.

Watch Video: How Justin Long Pranked Bruce Willis So Hard on 'Live Free or Die Hard' That He 'F-king Panicked'

Long plays Frank, a milquetoast lawyer at a soul-sucking firm that denies accident victims their insurance payouts. He’s not a bad guy, exactly, just an unthinking and worn-down one.

Since this entire project is a concept in search of a movie, Frank needs to learn some life lessons. To kick things off, his friend Jeff (Donald Faison) suddenly insists they find an adventure. Though Frank offers a halfhearted objection — it is a Tuesday, after all — there’s a plot waiting to be fulfilled. So off they go, to a grungy bar where they meet two mysterious women (Katia Winter, Sheila Vand). Then it’s on to a chaotic house party, where he finds Aeolus (Tommy Flanagan), a creepy guy with a giant teddy coat and Scottish accent that appear to represent “back story.” But all we really need to know is that he’s the gateway. Once Frank accepts the unnamed drugs Aeolus is pushing, he’ll walk through a door into the unknown.

In other words, the concept is now unfurling: Frank spends the rest of the night and the next day tripping, his hallucinations leading him from one disastrous encounter to the next.

There are ways to make this journey thrilling, as plenty of predecessors have proven. (Doug Liman’s dazzling “Go” is an apparent influence.) But music-video director Gille Klabin and screenwriter Carl W. Lucas, both making their feature debuts, haven’t found an approach that can match their enthusiasm.

They do have an appealing pair in Faison and Long. The two find some amusement in the abjectly ridiculous setup, and Long locates the heart of both Frank’s numb reality and his freakout paranoia.

But even a weirdo drug comedy needs some clarity. And there’s not much to be found here, either in the muddy visuals, familiar special effects, or pursuit of psychotropic faux-wisdom.

To the unaddled, Frank’s mind-blowing, life-changing experience is actually just a path paved with dull clichés. We start with the shrill wife (Sarah Minnich, “Better Call Saul”), whose ceaseless nagging offers a convenient excuse to walk away. Naturally, an enigmatic femme fatale (Vand, “A Girl Walks Home Alone at Night”) awaits, inspiring our hero to take new risks. And then it’s just a short leap from the violently deranged dealer (Ronnie Gene Blevins, 2018’s “Death Wish”) to the homeless man (screenwriter Lucas) who is actually a magical dispenser of crucial insights.

Klabin seems to be speaking directly to the overlapping segment of a Venn diagram that includes midnight movie fans, stoners who love hearing about other people’s dreams, and Justin Long completists. For anyone outside that particular demographic, this frenetic trip may wind up feeling more like an exhausting slog.