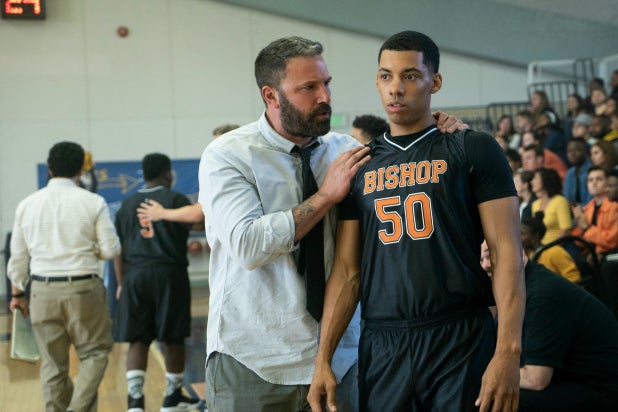 Gavin O’Connor is so skilled at eliciting suspense and excitement from buzzer-beater clichés that it’s easy to mistake “The Way Back” for another sports movie in the vein of “Miracle” or “Warrior.”

But in fact, his second collaboration with Ben Affleck (following 2016’s “The Accountant”) is a rich character drama about loss, addiction and self-destruction that only incidentally focuses on the business of life lessons and whipping a ragtag team of misfits into a winning ball club.

Affleck ostensibly lays himself bare as a fledgling coach wrestling with alcoholism after abandoning a promising future as a player, while O’Connor offers a hard and unflinching look at the opportunities, even great ones, that paper over but never fully repair our most deeply held traumas.

Affleck plays Jack Cunningham, a former basketball prodigy who walked away from the game after high school and spends his adulthood alone working manual labor and repeatedly drinking until he blacks out. His sister Beth (Michaela Watkins) reluctantly tolerates his tardiness and unreliability but Jack deflects or reacts angrily at inquiries into his consumption habits, much less his everyday well-being. His separation from his wife Angela (Janina Gavankar, “The Morning Show”) has languished for over a year in the wake of the death of their young son from cancer, but he doesn’t make it easy for either of them to move on with their lives.

When the head coach at his alma mater suffers a heart attack and decides to retire, the school reaches out to Jack to work with subdued assistant coach Dan (Al Madrigal, “I’m Dying Up Here”) to get the rowdy, undisciplined players into shape. With Dan and the patiently disapproving team chaplain Father Mark (Jeremy Radin) in tow, Jack quickly sizes up his players’ strengths and weaknesses and begins the slow process of teaching them to work together, even as he sneaks booze during practice and grapples with his temper.

Soon, the team wins a few games and entertains the possibility of making the playoffs, and Jack tentatively starts to re-engage aspects of his former life, including with Angela, that he’d cut off. But as Jack’s new professional opportunities and his simmering personal issues collide, he quickly begins to realize that even a winning season — and a chance for redemption after abandoning the sport decades ago — will not easily turn around decades of pain, anesthetized with booze.

The characterization of O’Connor’s sports movies at the top of this review isn’t entirely accurate; in both “Miracle” and especially “Warrior,” the filmmaker examines the interior lives of his characters far too vividly for them to “merely” fulfill the rhythms of their formulas. (It’s also why they’re enduring benchmarks in the subgenre.)

Working from the screenplay by Brad Ingelsby (“American Woman”) with Affleck, who clearly exploited the story as an opportunity to exorcise some of his own personal demons, O’Connor lingers in the mechanics of basketball games only as long as they serve as a distraction from the real problems in Jack’s life that he first ignores, and then starts to believe he’s conquered. Mind you, he’s still dumping a full bottle of vodka in his coffee rambler every morning, but his team’s victories deceive him into believing that it’s their spotlight that’s warming him.

What “The Way Back” showcases brilliantly is how essential support systems can be for functioning substance abusers, and yet how when they’re largely self-imposed, they can be an illusion, causing worse problems when they finally disappear. Jack gains something to look forward to; he likes the kids, and he proves he knows how to coach, even if his constant string of profanity of the sidelines exasperates Father Mark.

But coaching the team becomes a distraction from dealing with his real problems, including his grief, his deteriorating personal relationships, and a long history of family dysfunction that, he reveals, goes back to his own adolescence. His advice to the kids, on and off the court, evidences enough self-awareness to suggest he knows not to repeat his mistakes, but he also isn’t doing the hard work of addressing his own, which eventually catches up with him.

That the movie explores the causes and consequences of his alcoholism is what elevates it to something genuinely moving and profound if decidedly less fun, particularly if you were lured to the theater with promises of scrappy kids, an unconventional coach and some last-second, triumphant victories. O’Connor’s work here behind the camera is equal to Affleck’s in front of it, as the two of them navigate this character’s complex minefield of shortcomings both earned and adopted, never letting him off the hook but attempting to explore and understand how and why these destructive patterns of behavior settle into rhythm.

More broadly speaking, there’s something more than a little bit wonderful about an adult-themed drama competing for even just a little bit of sunlight in studio schedules more and more clogged with oppressive franchise tentpoles. And yet, this is the first movie of 2020 for which I’d actually like to see a sequel because it’s a movie that understands that change in ordinary people’s lives doesn’t happen with an epiphany, but with difficult choices, sustained over time with incremental change, hard work and persistence.

Given his remarkable honesty about his own alcoholism, Affleck feels like the ideal person to portray that experience on screen. But led by O’Connor, a collaborator who had his own near-miss with superheroes before returning to the intimate, humanistic material that showcases his reliable, gifted storytelling, “The Way Back” proves to be the kind of hero’s journey that audiences really need, even if it’s not the one they think they want.