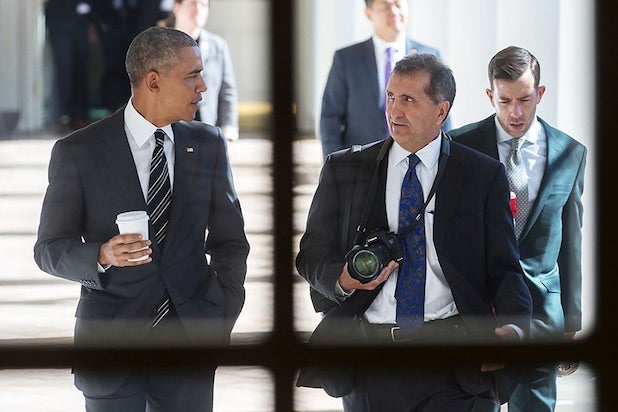 The first Instagram post from former White House photographer Pete Souza came early in the Donald Trump administration when he posted a photo of the Oval Office with the red drapes that had been there while Barack Obama was president. “I like the old drapes better,” Souza wrote in the caption, in an obvious reference to the shinier gold curtains that had been installed when Trump took office. When a social media user applauded him for dropping shade with that photo and that comment, Souza said, “I had no idea what dropping shade means.”

He has since learned exactly what dropping shade means, and he has continued to do it. In fact, “The Way I See It,” a documentary that premiered at the Toronto International Film Festival and will be released by Focus Features on Sept. 18, is in many ways 102 minutes of Pete Souza dropping shade, eagerly aided and abetted by director Dawn Porter (“John Lewis: Good Trouble”).

The film is a chronicle of Souza’s time photographing the Obama and Ronald Reagan administrations, and it barely mentions Trump by name during its first hour — but when photo after photo of Obama spotlights his empathy and compassion, and when Souza comments, “To me, that shows how the job of the president should be done,” the contrast with the current occupant is pointed and unmistakable.

Also Read: Obama White House Photographer Doc 'The Way I See It' to Air on MSNBC After Toronto Premiere

And when historian and author Doris Kearns Goodwin lists the qualities of a good president as including humility, communication, the ability to remain cool and the self-confidence to surround yourself with people who will argue with you, she doesn’t need to mention the current occupant of the job for you to get the point the film is trying to make.

Made on a quick schedule so that it could be released before the election, “The Way I See It” is a marvelous portrait of Souza and of two administrations that not coincidentally also works as a scathing rebuke of Donald Trump. It is decidedly not a film for Trump fans, but others may well find themselves moved and saddened by the contrasts between then and now.

The film is based around two books by Souza, 2017’s “Obama: An Intimate Portrait” and 2018’s “Shade: A Tale of Two Presidents,” and portions of it were shot on a book and lecture tour to support the latter book. That work, which juxtaposed Souza photos taken during the Obama administration with tweets from Trump, was a decided change for the longtime photojournalist who originally turned down the job as White House photographer during the Ronald Reagan administration because, he said, “I was not really into politics.”

But Reagan pulled him in and impressed Souza — who was not a fan of the president’s policies — by being “exactly the same behind the scenes as in front of the camera.” The movie gets through Souza’s Reagan years quickly, partly because he had more access and produced more dramatic shots when he was hired to shoot Obama, who he’d first covered as a congressional candidate and who said to him when he took the White House job, “We’re gonna have some fun.”

When asked what he initially thought of Obama in one of his on-camera interviews for this film, Souza shrugs and says, “I found a good subject.” He did, and he was allowed extensive access to document history as it was happening.

The film hits a turning point of sorts when it contrasts Souza’s photo of Obama and his aides during the raid that killed Osama bin Laden with the official White House shot of Trump and his generals during the 2020 killing of ISIS leader Abu Bakr al-Baghdadi. The first is a tense and unposed shot in which the men and women in the room have their eyes trained anxiously on a monitor to follow the action, while the latter is a still, formal portrait in which Trump and a panel of fully uniformed officers sit ramrod-straight, clearly posing for the camera.

After that, the film and Souza take more opportunities to directly speak about Trump. “I made the conscious decision that I couldn’t not speak out,” Souza says at one point. “I don’t want young people to think that this is the way a president behaves. No, it’s not.”

“The Way I See It” is an entertaining portrait of Souza himself, and also a robust collection of revealing images from the eight years of Obama’s presidency. But at a certain point, it moves beyond being those things and grows more and more explicitly a denunciation of Trump. “This is not a partisan thing to me,” Souza says. “This is somebody that I think is not a good person.”

In its final stretches, the film runs the risk of belaboring the point that it initially made far more subtly — but at the same time, it’s hard not to feel the urgency with which it approaches its task in these perilous times. And the photos, well-chosen and well-presented, do tell the story.

“My America is in these pictures,” Souza says toward the end of “The Way I See It.” And if you’re at all inclined to look back fondly on the Obama presidency, you’ll probably find your America here, too.