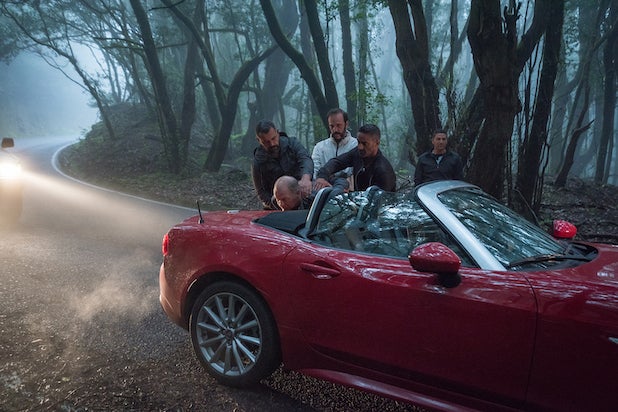 When Corneliu Porumboiu began making films in Romania just after the turn of the century, we knew what Romanian cinema was like — or, at least, we knew what the branch that came to be known as the Romanian New Wave was like. The movement, one of the most vital cinematic eruptions of the 2000s, was full of dark, minimalist, realist films that depicted, either overtly or implicitly, a society that was rotten to the core.

There’s some of that in Porumboiu’s “The Whistlers,” which had its world premiere on Saturday at the Cannes Film Festival. The film is dark and it’s set in a world where you can’t trust anyone — but it’s also got John Wayne and Alfred Hitchcock homages and enough twists and turns to require a detailed scorecard.

“The Whistlers” is no minimalist slice of realism, but an oversized, deliciously twisted ride that runs on an endless supply of black humor and a sizeable body count. You won’t laugh much while you’re watching it, but it’s a hoot nonetheless.

And while it doesn’t feel like a typical entry in the genre that was launched to international attention by Cristi Puiu’s “The Death of Mr. Lazarescu” and Cristian Mungiu’s “4 Months, 3 Weeks and 2 Days,” that’s to be expected. The movement long ago morphed into a group of creative filmmakers going in whatever direction they wanted, with a jaundiced view of society and a dark humor being the only constants.

And a humor that’s so black you can barely see it has long been one of Porumboiu’s go-to skills. His brilliantly exasperating drama “Police, Adjective,” which won the Jury Prize in Un Certain Regard at Cannes in 2009, was a procedural that deliberately bogged down in endless semantic arguments; you either surrendered to its talkiness or you threw up your hands in frustration, and either way the director was probably fine with your reaction.

“The Whistlers” is his first film to make it into Cannes’ main competition, though the writer-director has had success at the festival through the years — not just “Police, Adjective,” but also his short “A Trip to the City (Calatorie la oras),” which won second place in the Cinefondation competition in 2004, his debut feature, “12:08 East of Bucharest,” which took the Camera d’Or as the best first film at Cannes in 2006 and his 2015 film “The Treasure,” which won the Un Certain Talent award in UCR.

The new film is about Cristi, a police officer who comes to Gomera, a rocky outcropping described as “the jewel of the Canary Islands” by a chirpy tour guide. He’s been sent to help free an imprisoned businessman, Zsolt, but first he has to learn a local language that consists entirely of whistling; the idea is that if he knows it, he can communicate without tipping off the various private and governmental forces who are tracking and watching his every move.

The whistling language is ridiculous but presented with the utmost earnestness (and conveniently subtitled). Cristi’s mission, though, is all but doomed from the start. Nobody trusts anybody else, everybody is cutting deals and making double-crosses at every opportunity, and Cristi is under such close scrutiny that the colleague who recruits him has to pose as a high-priced hooker for the surveillance cameras in his house. (She does a thorough and convincing job.)

The labyrinthine plot can be hard to follow, but the deadpan humor keeps things moving. Porumboiu is in a playful mood from the moment the film opens with Iggy Pop’s “The Passenger” blasting on the soundtrack to the “Psycho” reference that pops up in violent scene near the end.

Nobody’s innocent, hardly anybody survives and the ride is stylish fun the whole bloody way.