Cable is in no danger of de-bundling or significant decline — and ESPN has no incentive to go a la carte — the sports leader’s president John Skipper said Tuesday at TheGrill, TheWrap’s fourth annual Media Leadership Conference.

“It’s the best value in entertainment, and it’s not in a precipitous decline,” Skipper said. “Paid TV has for many years held almost all the good video. Now there are places where quality video exists outside this system. I think it will grow. The question is, Will it grow to the detriment of pay TV? So far, it hasn’t had any significant effects.” 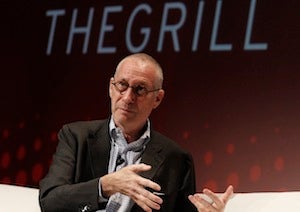 Skipper was also quick to dismiss the media chatter — fueled by Arizona Sen. John McCain’s bill proposal — that an a la carte system is on the horizon.

“I get asked all the time, why don’t you do something different? Why don’t you go a la carte? … if there’s a better way, I’d love to hear what that idea is.”

Certainly not the one that’s been languishing in Congress.

“They’re struggling to just keep the government running right now,” Skipper said. “I doubt they’re goinna reach down here and make sure people can get paid television through a different mechanism.”

Previous speakers at TheGrill, in its second and final day, had suggested that cable TV is in trouble because when speaking at USC, a show of hands revealed that almost no students paid for a TV subscription.

Skipper dismissed that notion with a rhetorical question of his own for the students. “When you get out, would you like to watch Southern Cal play football?,” he said, suggesting that a roomful of hands would go up. “The only mechanism to do that is to get a paid television subscription.”

Skipper acknowledged that the marketplace is rapidly shifting, but rejected that those changes are eroding cable.

“In the current environment, when you say there’s fragmentation — what we’re really talking about is proliferation,” Skipper said. “I’m not dismissing that things are happening. There are new sources of video.”

“ESPN has pushed at the boundaries of how much sports content is relevant … there doesn’t seem to be any lack of appetite for more stuff,” Skipper said. “We’re going to continue to push forward. We’ll do about 60,000 hours of sports this year — that’s about eight hours per hour. Our intention is to do more. For every team that plays, there are fans who want more of it.”

“They’re in this for the long run,” Skipper said. “They proved that when they chose distribution into 90 million homes. They’re smart people, they’ve got assets, they’ve got cash. We expect them to be around … I think they’re going to have a good business. Doesn’t matter to me if they do or not … if there’s a growing overall sports media business, they don’t have to infringe on ours.”

“He has of course a track record of having a difficult relationship with his management. In this case I guess that would be me,” said Skipper, who indicated a so-far, so-good relationship. “It’s just a question of benefit and detriment. My judgment is it’s gonna be worth whatever future problem we may have.”