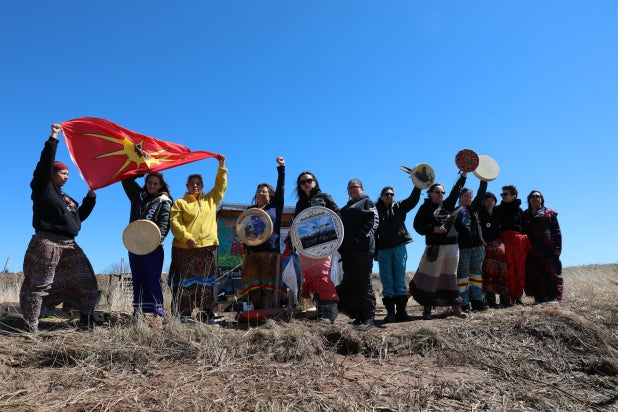 “Canada takes care of its people,” Ellen Page confesses to once believing in her new documentary “There’s Something in the Water.” The country is famous for its progressive legislation, including universal health care, marriage equality and legalized marijuana, but that public image obfuscates a history of racist policies that have endangered the lives and livelihoods of black and indigenous peoples.

Co-directed by Page and her “Gaycation” co-host Ian Daniel, this brisk and bracing new doc finds them traveling through Nova Scotia and speaking to community activists who are trying — desperately, and with a disturbing lack of success — to protect their lands and their water from landfills and industrial pollutants. This unchecked industrialization is poisoning residents, killing fish and threatening to wreak further havoc upon the environment and the human beings who depend on it for survival.

“There’s Something in the Water,” based on the book of the same name by Ingrid Waldron, makes its first disturbing revelation with a simple map of Nova Scotia. A straightforward overlay of the local black and indigenous communities, on top of the map of dumping sites, reveal bulletproof evidence that nonwhite communities have been disproportionately targeted for disaster.

Watch Video: 'There's Something in the Water' Director Ellen Page Says She Never Intended to Make a Film About 'Environmental Racism'

But although Waldron appears and contextualizes this information, the majority of Page and Daniel’s film finds the directors on a road trip throughout the province, visiting community organizers and protesters in their homes and taking guided tours of suffering communities. Page, who was born and raised in Nova Scotia, knows some of these areas well, and some of her interview subjects reveal that they’re acquainted with her relatives.

There are moments of Page’s voiceover narration where the actor-producer-director frames the subject matter from her own, recently enlightened perspective. There are images of Page as a child, accompanied by narration about her once-naive worldview, followed by footage of her on “The Late Show,” talking about these issues with Stephen Colbert.

“And the more I saw,” Page narrates, “The more I couldn’t help but use my platform to speak out.” It’s sentiment which addresses the elephant in the room — Page’s celebrity — but which also sets the documentary off on a somewhat awkward note, and suggests that the film we are about to see might focus on her own journey of revelation.

But once the road trip begins, Page cedes almost all of the film to her interview subjects, giving herself screen time only in moments that create a sense of local community. “There’s Something in the Water,” like its subjects, is deeply distrusting of the politicians and corporations who have historically made false promises to clean up these areas. If Page and Daniel spoke to the groups and individuals poisoning Nova Scotia, they chose not to use that footage.

Also Read: Ellen Page, Kasi Lemmons and Halina Reijn on How the 'Landscape Has Changed' for Female Directors | Video

Instead, their faith lies in local grassroots groups, and by emphasizing their close proximity to each other — the whole film plays like a relatively short travelogue — “There’s Something in the Water” manages to make the audience feel like it’s another resident. Afterwards, if the movie seems like it’s trying to reach out to folks like Ellen Page, the approach seems practically weaponized: the government and corporations aren’t listening to the people in this documentary, as monstrous as it sounds, and everyone else needs to get involved.

The stories told in Page and Daniels’ documentary are filled with grief and frustration: People who genuinely don’t believe they’ll live to grow old because everyone they know is dying from cancer. Descendants of local leaders who were conned into allowing catastrophic chemical pollutants into their waters by people who, in archival footage, brush off concerns of local health with a despicable “So what?” Then they segue into unthinkable platitudes about how the people who live on the horrifically polluted Boat Harbour will be fine, because they don’t live “in” the water.

It’s moments like these when the only rational response is to throw something heavy at the screen. But for a variety of reasons, you probably shouldn’t.

Watch Video: Ellen Page: I'd Be 'Thrilled' to Only Play Queer Roles

There’s hope to be found in “There’s Something in the Water,” in the good intentions and implacable drive of the protesters. In particular, in the angry and smart Water Protectors of Stewiacke, who are seen making themselves as much of a nuisance as possible to prevent Alton Gas from sloughing toxic amounts of salt into their waters in order to retrieve underground gas.

By using loopholes in old agreements and publicly chastising Canadian Prime Minister Justin Trudeau — who comes across in this documentary as smug and obtuse — they seem to be paving a road to success. That is, if the corporation, which has “helpfully” built a cage for them to stand in whenever they protest at the site, doesn’t find more ways to screw them and their lands over.

The conclusion of “There’s Something in the Water” leaves us with some positive updates about the people we’ve met and the disasters we’ve learned about, but it’s hardly a soothing balm. We are not left with the sense that everything is going to be all right from now on. Page and Daniel’s film, at a spry 70 minutes, doesn’t condescend to offer all the answers. Instead, the film leaves us with a sense that some people — interesting, strong people with impressive depths of character — will never stop fighting until improved conditions will be possible. And that if we had any character of our own, we too would be those people.

For the record: A previous version of this review quoted passages from an earlier version of the film that were edited out of the final cut.