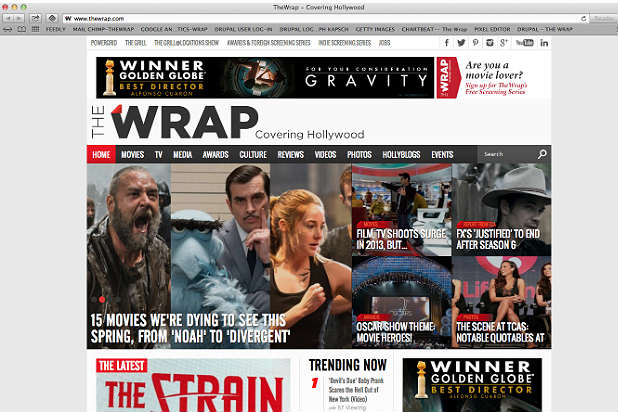 TheWrap is pleased to announce that it has achieved its highest traffic month in the history of the site, surpassing both industry trades Variety and Deadline.

Among the four Hollywood industry news sites, the comScore ranking places TheWrap No. 2 behind The Hollywood Reporter which earned 5.7 million unique visitors in December, according to the ranking service.

“It is an incredibly exciting time at TheWrap as we’ve scaled our newsroom and traffic in the past year while maintaining our commitment to high quality reporting and analysis,” said founder and CEO Sharon Waxman. “But even with all this growth, we believe that our most exciting days are still ahead of us.”

TheWrap’s growth initiative includes a site redesign launched in September 2013, significant editorial hires over the past year and a new focus on original video content with the build-out of a video production studio.

As an independent digital media company, TheWrap has maintained profitability and will continue its upward trajectory as it expands its digital footprint in 2014.

The traffic milestones over the past year do not include TheWrap’s global footprint due to its long-standing agreement with Reuters news service, to which it is the exclusive entertainment news partner.

Founded in late January 2009, TheWrap has achieved this latest milestone on the eve of its fifth anniversary.

About The Wrap News Inc.
The Wrap News Inc., founded by award-winning journalist Sharon Waxman in 2009, is the leading digital news organization covering the business of entertainment and media. As a multi-platform media company, The Wrap News Inc. is comprised ofTheWrap.com, the award-winning, industry-leading outlet for high-profile newsbreaks, investigative stories and authoritative analysis; PowerGrid Pro, the most current, relevant film development database; ThePowerGrid , an algorithmic, data-driven ranking system for every person, project and company in the film business; and TheGrill, an executive leadership conference centered on the convergence of entertainment, media and technology. The Wrap News, Inc. is backed by Maveron, a venture capital firm based in Seattle, Washington and co-founded by Starbucks CEO Howard Schultz and Dan Levitan. TheWrap was nominated as the Best Entertainment website in 2012 and named the best online news site in both 2012 and 2009 at the National Entertainment Journalism Awards by the Los Angeles Press Club. It has won many other awards for investigative reporting, columns, criticism and feature writing. TheWrap was named one of the “100 Most Important Online Publishers” in 2010 by OMMA, the magazine of online media, marketing and advertising.