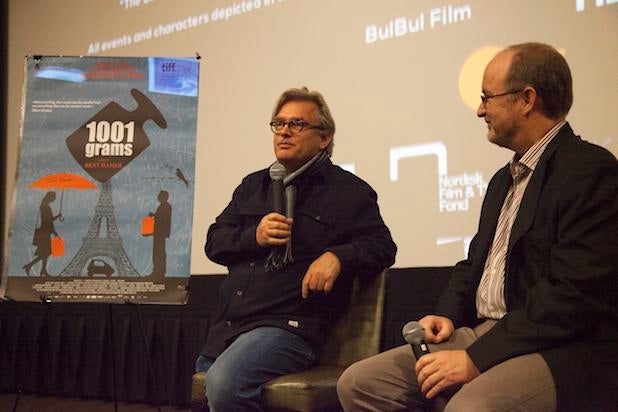 Norwegian filmmaker Bent Hamer mostly has made films centering on leading men over the course of his celebrated career, but his country’s Oscar hopeful “1001 Grams” is one of the few to focus on a female protagonist — a casting decision he credits to his late wife.

Hamer told attendees at TheWrap Award Series screening at the iPic Theater in Los Angeles on Tuesday that leading lady Ane Dahl Torp got the role of a divorced scientist grieving the loss of her father by enchanting his wife during a random meeting at a film festival years ago.

“I’ve been asked why can’t I make a film about a female protagonist, and it was especially my wife, who also the film is dedicated to — she died this summer, sorry — but it’s a nice part of the story,” Hamer said during a Q&A after the screening of the romantic drama Norway is submitting for Academy consideration in the Best Foreign Language category. “Quite some years ago we went to a film festival, and she ended up in the back seat [of a car] with this actress, and she asked my wife if she could fix it so I could make a film with a female, and she said, ‘Of course, I will see what I can do.'”

Years later, Hamer’s wife ran into Torp in Paris, where half of “1001 Grams” is set. Torp portrays an employee at the Norwegian institute of weights and measures, who is tasked with transporting a prototype weight of the national kilo to an international conference where it will be calibrated with the international kilo.

While Hamer admitted he was still “looking a bit” before settling on Torp, he said he was “very happy” he chose her to play the the emotional anchor in a story about a woman “saying yes to love, and yes to life” when she unexpectedly falls for a French man in the City of Light.

Although there seems to be never-ending discussion about women fighting for more meaningful cinematic roles, Hamer said he wasn’t all that concerned with gender, so much as he was crafting a story that was human at its core.

“If it was a male protagonist, I doubt it would be that different,” Hamer said. “She’s a human being, and I think I would have been approaching the story in the same way. At least, I like to think that.”