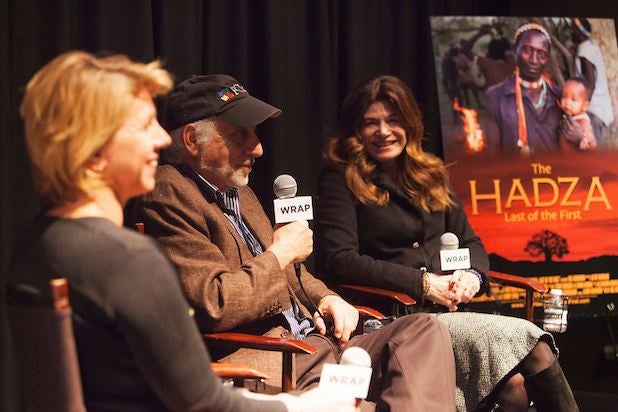 “The Hadza: Last of the First” gives much of the world the only current glimpse into the lives of hunter-gatherers who may be the oldest population living in East Africa, and the filmmakers hope their way of life will inspire audiences to question theirs.

“I do think you can see, and I hope you felt, that their way of life is quite exemplary,” director Bill Benenson said at TheWrap‘s Awards Season Screening Series presentation of the film at the Landmark Theater in Los Angeles on Monday. “Or at least interesting enough to make us think about how we’ve become what we are today, and how we deviated from a system that brought other results.”

The documentary lifts the veil on the indigenous tribe called the Hadza — nomads that have been living off the land in Tanzania’s Rift Valley for over 50,000 years. The peaceful group takes only what they need on a daily basis, and consider themselves protectors of a land they believe belongs to the animals, as opposed to “civilized” society’s understanding it is meant to be bought, sold and owned by man.

The film is as much of a reflection on humanity’s evolution as it is a demonstration of a sustainable lifestyle. Bill, who produced the film with his wife, Laurie Benenson, paraphrased a friend’s reaction to the film to explain why it should resonate with audiences.

“This was a film about genetic memory, a link to who we were, and how we became who are now,” Bill said. “She felt the film was a way of honoring what we were, and who we could become if we had other choices and realized not everything has been dependent on agriculture and capitalistic society.”

The viewing experience is ripe with wonder, as cameras give audiences a rare chance to observe the Hadza’s hunting trips, foraging methods, organic food preparation, and social interactions, which don’t appear to be all that different from our own. Singing and dancing is a staple, while little girls enjoy playing with handcrafted dolls and boys begin shooting their first bow and arrow by age two. Family and community are as important to the Hadzas as the food that keeps them alive.

But that’s where the cause for concern comes into play. The Tanzanian government has seized much of the Hadzas land, and cattle belonging to rival tribes are devouring many of the natural resources they depend on. Big game is also becoming increasingly scarce, forcing the men to feast on small rodents that yield as much meat as a drumstick from KFC.

“It wasn’t until we went out and filmed in 2011 that we realized how very threatened they are,” Laurie said at the screening. “During filming we became deeply aware of the other tribes that are impinging on their land, and the pressures their facing. We had the privilege to actually film, and this is when it became obvious that they’re not only an interesting, rare and extraordinary culture, but they’re about to go away.”

Another threat to the ancient culture is pressure to conform to a modern lifestyle. The majority of the 1,000 Hadzas living in the area have given up hunting and gathering to work for money to buy goods, instead. When the Benensons began filming in 2011, 300 Hadzas were living off of the land. These days, only about 200 are.

Laurie stressed it’s important the Hadza are allowed to make “a choice” between which lifestyle they prefer, but with so many threats impeding on their land, it’s getting harder to follow in their ancestors’ footsteps.

Bill said any land boundaries legislatures have granted the indigenous population “are only as good as whether the government and tribes will be willing to leave the Hadza and their land alone.”

“It’s scary,” Bill added. “That coin is flipping in the air right now, and I don’t know which way it’s going to land.”

“Last of the First,” however, is proving to be a useful tool in helping to flip the coin in the right direction.

Two months ago, the documentary was screened at a human rights conference in Tanzania, and it opened the eyes of some delegates who had no idea that one of the oldest cultures in the world was on the brink of extinction.

The film will also represent the Hadza, as well as indigenous cultures around the globe, when screened at the 2014 World Parks Congress in Sydney, Australia.

“We’re trying to alert people to both importance of the Hadza, and their needs to have their lands be both protected on paper and in reality,” Bill said. “It is this race against time, and a race against prejudice.”